This couple have spent decades giving back to Finlandia Village
Jan 22, 2020 12:00 PM By: Marlene Holkko Moore 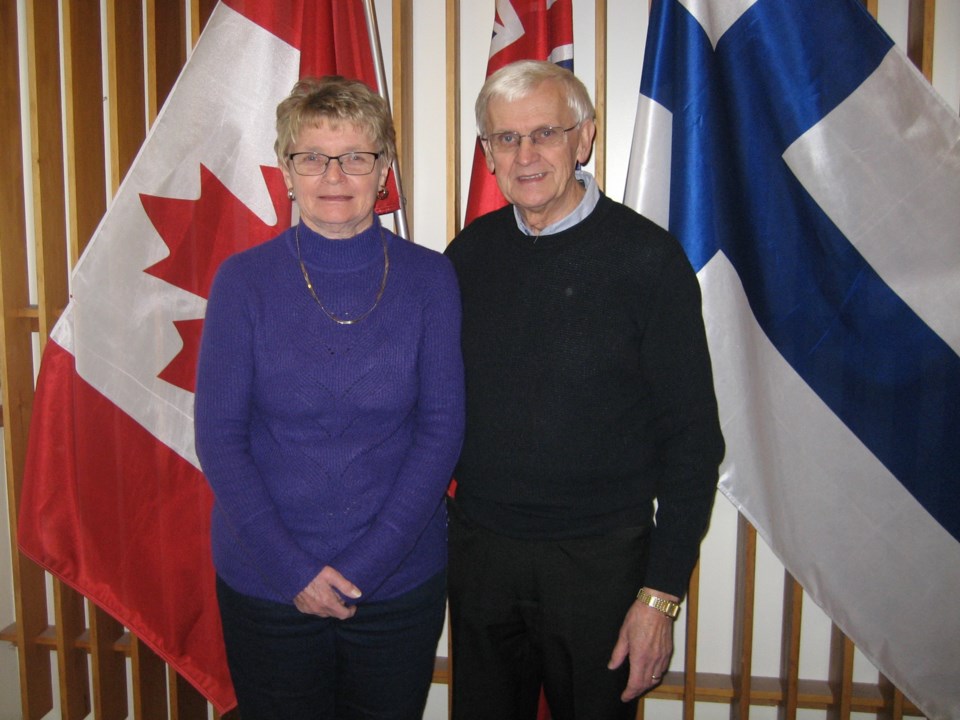 Finnish history has been a lifelong passion for Reijo Viitala and, together with his wife Carol, this proud Finnish Canadian couple is helping to keep their heritage, cultural traditions and music alive in our community. (Image: Marlene Moore)

Finnish history has been a lifelong passion for Reijo Viitala and, together with his wife Carol, this proud Finnish Canadian couple is helping to keep their heritage, cultural traditions and music alive in our community.

Born in Nivala, Finland, Viitala and his family moved to Canada in 1958 when Reijo was 12. The family of five spoke no English and settled in Wanup, where they had a relative who had immigrated several years prior.

Carol, on the other hand, was born and raised here in Canada, as were her parents and two siblings.

“It was my grandparents who had immigrated from Finland and, like so many Finns of that era, they also settled in Wanup. Being a small family, we had few relatives left in the old country.”

Viitala’s career began as an itinerant French teacher in the public school system. Soon thereafter, he was hired to teach French and Finnish at Lively High, and 10 years later he transferred to Lo-Ellen Park Secondary to join their newly established French Immersion program. He retired in 2005 after 33 years of classroom teaching in the French Immersion and International Baccalaureate programs.

Carol was a stay-at-home mom raising their two children when she began volunteering alongside her husband at Finlandia Village. That experience turned into a decade-long full-time job as a supportive housing aid in the assisted living department.

“With my brother and sister both living in Timmins, working at Finlandia and connecting with such wonderful residents and staff filled a void. They are family to me,” she said.

“My parents just couldn’t afford to buy me an instrument, let alone lessons.”

But that desire never waned, and at age 30, Viitala began studying under renowned teacher and performer, the late Karl Pukara.

“Despite the challenges of learning to read and play music later in life,” said Viitala, “I persevered and my efforts (and Karl’s patience) paid off. Now I regularly entertain Finlandia residents and everyone seems to enjoy listening to the old Finn standards.

“Music has a particularly profound effect on Finnish immigrants residing at Finlandia, especially when they lose the ability to express themselves in their mother-tongue. What’s left is music and rhythm. Together, everybody enjoys the music and nods along. Music truly is a universal language and the accordion is in their hearts.”

Viitala started volunteering in earnest in 1989, when he was invited by the late businessman Arne Ritari to help charter a new Lions Club in Sudbury, one that was made up of members with Finnish lineage. Viitala remained an active Lion for 30 years, until the organization closed in 2019.

“Lions Clubs have an international impact and deal a lot with young people,” he said. “My proudest achievement is our club’s involvement in the Legacy Bowl Under 20 Hockey Tournament, which in Finland is equivalent to the Canadian Memorial Cup. We raised funds to produce two championship trophies.”

One trophy circulates among winning teams and the other was donated to the Finnish Ice Hockey Association, where it is on permanent display in Tampere’s hockey museum / hall of fame.

In the 1980s, Viitala’s parents asked him to help them with the Sudbury Finnish War Veterans’ Association by taking on the role of secretary and organizer of events and summer picnics at Hannah Lake. When his dad, a founding member of the Sudbury Finnish Rest Home Society, retired from its board of directors in 1986, he urged his son to replace him.

“My role models for volunteering are definitely my parents,” said Viitala. “They worked long hours founding and establishing Finlandia Village from the ground up. They were involved from the board level to the ladies’ auxiliary and veterans’ programs. My mother and dad were particularly strong supporters of Finnish war veterans who persevered as immigrants in a new land where the language and customs were foreign to them.”

To this day, much of Viitala’s time remains dedicated to Finlandia Village, where he says the need for volunteers is greatest among the aging population. Aside from his duties as board chair, Viitala has led the Finnish War Veterans’ Association of Sudbury since 1998, coordinating Finnish Independence Day celebrations and organizing numerous other important initiatives, including veteran rehabilitation programs and activities.

And Carol, his wife of 49 years, is right there by his side, equally devoted to working with the veterans. She assists with all events, including special concerts and the monthly singalongs.

“We have all become such great friends over the years,” she said.

Thanks to the Viitalas’ efforts, Finlandia Village has developed a comprehensive exhibit of historical memorabilia displayed in the Impola Room, a space dedicated to highlighting the experiences and bravery of Finnish war veterans.

“Carol and I are a volunteering couple and we’ve always worked well together on projects and programs. We’re proud to be a strong team and encourage other couples to do the same.”