Meet Mary Lou Trowell, a longtime volunteer for the Alzheimer Society says donating your time is good for the body and soul
Jan 29, 2020 12:04 PM By: Marlene Holkko Moore 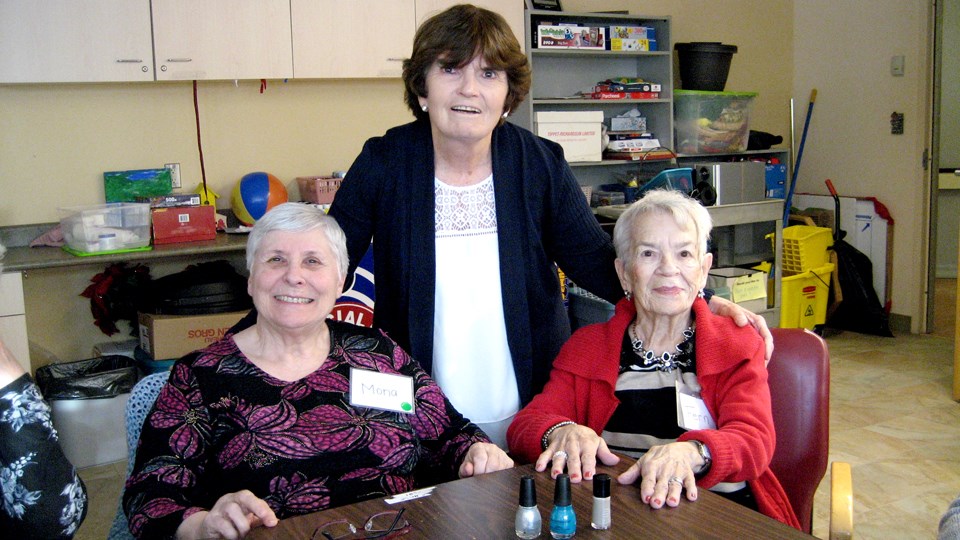 Mary Lou Trowell helps out with ladies day at the Alzheimer Society, where clients like Mona (left) and Fern (right) enjoy one another’s company while receiving a pampering manicure. (Image: Marlene Holkko Moore)

As a highly trained, experienced health-care professional and educator, Mary Lou Trowell has continued to keep her mind, body and spirit active in retirement. And, she says, it’s all because of the unique opportunities that volunteering has given her.

Trowell was born and raised in Renfrew, near Ottawa, and is a graduate of St. Michael’s Hospital School of Nursing in Toronto. She earned her B.A. in nursing from McGill University, as well as an M.A. in community college education from Central Michigan University. Trowell launched her career in nursing education at St. Mike’s.

“I met my husband Norm while I was attending McGill,” said Trowell.

The couple were married in 1969 and have two adult children. Jennifer, the eldest, works as director of account management at United Health Care and Mike is vice-president of Comprehensive Benefit Solutions Limited in Oakville.

While Trowell stayed home to raise her young family, she discovered a unique opportunity to volunteer and still be with her infant daughter.

“I could bring Jenn with me to enjoy the company of other little ones while I assisted with childcare for the mothers who were being taught English for New Canadians.”

Trowell said own parents were long-standing volunteers, raising her and her siblings with solid values and demonstrating first-hand the importance of supporting community.

“My mom was a Brownie leader and involved in our school, and my dad was active in the local Legion. Their commitment shaped my future as a volunteer,” she said. “That’s why giving back is second nature to me.”

After returning to nursing in the early 1980s, Trowell found another way to continue giving back and still fulfil her passion for running. She became a parent volunteer at the school her kids attended.

“My husband and I have always been physically active people, and so I would help out by taking students for a run at lunchtime to help prepare them for competitions,” Trowell said. “Norm and I were also Beaver leaders.”

By the late 1980s, Trowell was teaching at Toronto’s Centennial College and her geologist husband was employed by the Ontario Geological Survey. When the province decentralized the Ministry of Northern Development and Mines to Northern Ontario in 1992, the family relocated to Sudbury.

“I was fortunate to be offered a nursing program professorship at Cambrian College,” Trowell said.

Shortly after moving North, Trowell joined the local chapter of the International Order of the Daughters of the Empire (IODE). Known for its annual Tour of Homes charity fundraiser, the IODE City of Lakes is also engaged in an initiative to provide personal hygiene products to emergency room patients at Health Sciences North, as well as to clients at the Northern Initiative for Social Action and Health Sciences North’s psychiatric outpatient clinic (Kirkwood site).

“Years ago, when we learned the hospital was no longer providing toiletries to patients, we decided to add that mission to our mandate,” said Trowell, who is responsible for this initiative within the chapter.

Trowell became involved with the Alzheimer Society after they approached IODE about sponsoring a client in the society’s day program, inviting the chapter to hold a meeting at their offices and see their program offerings.

“It was enlightening and inspiring,” said Trowell. “After witnessing first-hand the good work of the Alzheimer Society and getting to know of the organization’s exceptionally caring professionals and precious clients, I just knew this would be where I wanted to dedicate my free time in retirement.”

Once she did retire from Cambrian and after a few years of contract work with the Ontario Ministry of Training, Colleges and Universities, that goal came to fruition.

Trowell enjoys volunteering in the day program at Alzheimer’s so much that she only misses a couple of weekly visits a year to go on vacation. She also loves to see how fellow volunteers can help improve a client’s quality of life.

“I remember one volunteer in particular. She was a teacher and theatre actor who came to the day program and read stories. She even brought props, which was an amazing way to encourage everyone’s imagination. I remember one client telling me, ‘You know, it’s not so much what she says but how her story-telling makes me feel.’ ”

Trowell is also happy to volunteer alongside post-secondary placement students who work at the Alzheimer Society as part of their nursing, social work or gerontology programs.

“It’s natural to be a little nervous first coming into any organization,” said Trowell.

With her background in health care and education, she can sense any trepidation the students might feel.

“I try to help dispel their fear of the unknown,” she said.

The staff at Alzheimer’s are exceptional mentors and coaches to these budding health-care professionals. “In fact, they make them feel so welcomed and appreciated that some students remain volunteers even after their placements have been completed.”

“As a volunteer, you get back so much more than you give. Receiving smiles and hugs from people I’m helping leaves me with such a warm feeling. And, just as exercise keeps a person physically healthy, the opportunity to apply work and life skills as a volunteer exercises the mind and spirit. I love older people and I’ve learned so much from them over the years. How lucky I am for the opportunities that volunteering has given me.”