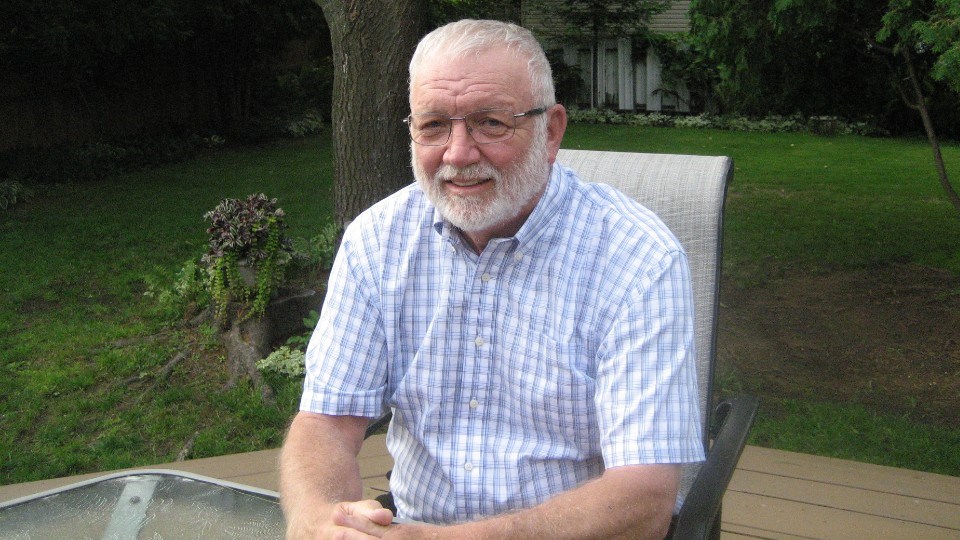 For retired schoolteacher, John Roberts, being active in sports since childhood motivated his desire to become a lifelong community volunteer and mentor to young athletes. (Photo: Marlene Moore)

For John Roberts, growing up enjoying a variety of sports inspired his lifelong passion for physical activity and volunteering, and influenced his long career as a teacher and  mentor.

Born in Essex, England, Roberts was a toddler when his family emigrated to Canada in 1950. His father, Eric, an RAF pilot in the Second World War, had become quite disenchanted with England after the war.

“Dad left his job as a state manager-game warden for a large private landowner to start a new life in North America,” said Roberts, adding, “He found work as chief dairy herdsman on a farm near Markham, Ontario.”

“My parents met when Dad was stationed in Cambridge and Mom was sent there on a placement.”

His older sister, Jennifer, is a retired elementary school teacher who lives in Toronto.

Roberts met his wife, Colleen, while taking a university course. Recently, John and Colleen celebrated their 46th wedding anniversary. They are best friends and look forward to many more adventures together.

They have two adult children.

Daughter Erin was recently married. She and her Lively-raised husband, Michael Darnbrough, live in Ottawa. She manages a post office and he is an assistant manager with Shoppers Drug Mart. Son Neal and his wife, Ashley, live in London. They are raising three kids under age eight.

“We’ve really missed visiting with our grandkids during the pandemic. Both Neal and Ashley are front-line workers. They are heroes to us all.”

During his teenage years, Roberts felt lucky to work as a camp counsellor for seven summers. Being outdoors and being active was a dream job.

During high school, he was offered a position as camp counsellor with the YMCA Camp Pinecrest on Gullwing Lake just outside Bala. He thoroughly enjoyed the opportunity to mentor youngsters in a variety of sports.

On the final weekend of camp, the campers and their families gathered to bid farewell to camp season. Instead of returning home, Roberts headed straight to teachers’ college in North Bay. He received his teaching certificate in 1967 and was fortunate to be hired for that summer as director of the local YMCA day camp. Living in the North also fed his passion for sports, playing football with the North Bay Tiger Cats.

That summer job quite handily led to another opportunity.

“A principal within the Sudbury Board of Education hired me on the spot, thus launching my career at Prince Charles Public School in Minnow Lake.”

Roberts taught at a number of elementary schools over 32 years before retiring from Robert Jack Public School in Garson in 1999.

He remembers delving into school sports during the first year he taught Grade 8 at Prince Charles.

“A couple of girls on the YMCA swim team approached me to assist their swim club. I had the time and looked forward to learning more about competitive swimming.”

At the end of that school year, Roberts was asked to take on coaching baseball.

“I still wanted to help out. I was becoming more and more interested in officiating. After completing volleyball and basketball clinics, I volunteered to run a track and field meet. The rest, as they say, is history.”

Roberts has been a dedicated volunteer in track and field since 1970.  Participating in sports in childhood inspired his lifelong passion for many sports.

“The person who impacted me the most was Earl Gibson. Early on in my teaching career, most elementary schools didn’t have gymnasiums, and it was Earl, the school board’s chief ‘phys ed’ consultant at the time, who mentored me in track and field. When Earl retired, Bill McKetsy and I took over co-ordinating and running board-wide track meets.”

Roberts’ volunteer involvement with the Ontario Special Olympic Games began in the 1980s, when the event was run by the Sudbury Police. Subsequently, in the 1990s, he took on roles with the Ontario and the Canadian Games.

“That was a wonderful experience and very enlightening, too. I learned so much from dedicated special Olympians, like ‘Winning isn’t everything—participation is the key,’ and the importance of reciprocal respect.”

Beyond the 1990s, Roberts was the ‘head guy’ for track and field for Ontario for close to 15 years. At one time, he also curled competitively and in club leagues. Once retired from teaching, Roberts transitioned to pensioners curling and, although he has stopped playing the sport, he enjoys volunteering in administration and co-runs the Friday Pension program at Curl Sudbury.

“Life provides us with many different opportunities to suit our current situation. At one time, I enjoyed being on the ice. Now, I find handling the administrative side just as rewarding.”

Up until the pandemic hit, Roberts was still officiating at elementary school track and field meets. He is also a committed mentor, grooming others in a variety of volunteer roles.

If you love sports, think about how much joy it gives you to participate and build friendships with others who share your passion. Think about how important it is to be physically active throughout life. Volunteering in sports in whatever capacity you can is so rewarding and gives you so much in return. The desire to give back comes from within, and volunteering should never be forced on anyone, particularly on our youth. Being active in sports motivated me to volunteer. It can develop a desire in young people to go forward and volunteer out of the goodness of their hearts. It’s up to the older generation to recognize that spark of interest and nurture them on the path to giving back.