Empowered by her parents and inspired by Greta Thunberg, Sophia Mathur is doing all she can to combat the global climate crisis
Oct 16, 2020 12:00 PM By: Marlene Holkko Moore 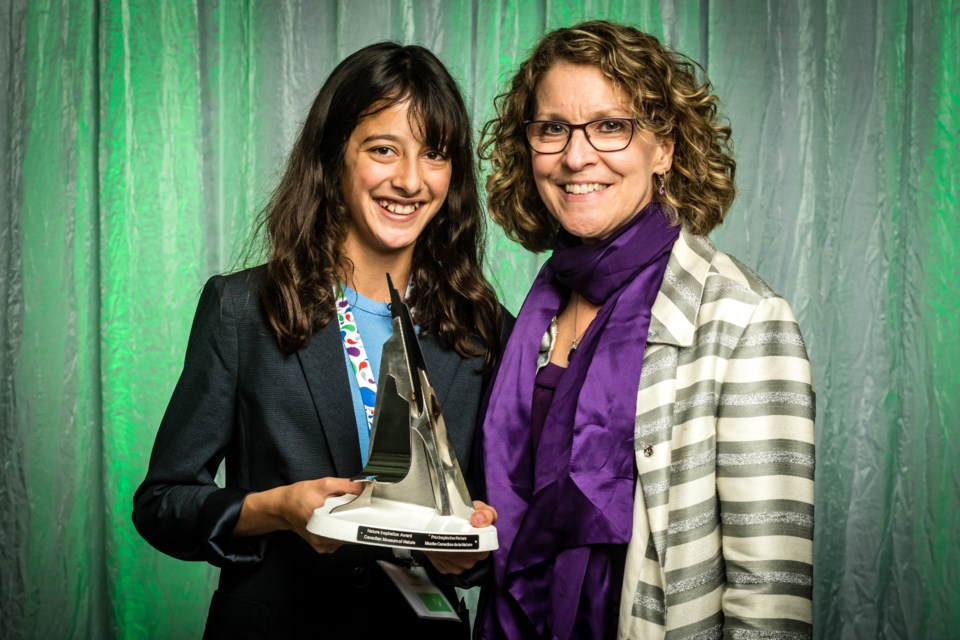 At the age of 12, Mathur was honoured with a Nature Inspiration Award in the youth category. Pictured with her at the Nov. 2, 2019 ceremony is Meg Beckel, president and CEO of the Canadian Museum of Nature. (Supplied)

Sophia Mathur knows a thing or two about the global climate crisis. This thirteen-year-old student environmental activist has been dedicated to making the world a better place since the tender age of seven.

The youngest of three girls, Mathur is the daughter of Cathy Orlando, founder of the first Canadian chapter of Citizens Climate Lobby (CCL) in 2010. A well-known Canadian climate activist, she now works as CCL’s international outreach manager. Her father is Dr. Sanjiv Mathur, an anesthesiologist at Health Sciences North and a strong advocate for improving the medical field’s carbon footprint.

“My whole life I’ve been aware about the effects of climate change,” said Mathur. “My parents have empowered me to follow in their footsteps. I’m proud to have inherited their unwavering passion to make a positive difference in the world.”

One of Mathur’s most influential mentors was her late grandfather, Dr. Sukhdev Mathur, a scientist with the Intergovernmental Panel on Climate Change (IPCC).

“He taught me so much about the environment. ‘Daddu’ cared deeply about Planet Earth.”

An activist since the age of seven when she joined her mother who was lobbying on Parliament Hill for climate action and carbon pricing, Mathur has developed her own independent efforts to galvanize climate initiatives.

In 2018, she began spending one Friday a month away from the classroom to lead public protests in solidarity with Swedish teenager and climate activist, Greta Thunberg. Thunberg was nominated last year for a Nobel Peace Prize for creating the Fridays For Future (FFF) movement.

Mathur was one of the first youth to join FFF international and soon after established Fridays For Future Sudbury (FFFS).

FFFS currently consists of a core group of 20 members, from students to adults. On May 3, 2019, their organized monthly strikes for climate transitioned into weekly strikes during the school year. These public events have attracted up to 1,000 participants, many of whom are children and teenagers who have joined the fight to build public awareness about global climate issues.

“This crisis may not affect adults as significantly as it will affect the lives of younger generations, but their apathy will have a tragic impact. We need their buy-in, their tangible help. Adults are the people in power. They are the decision-makers and policy-makers who can effect positive change that will heal and protect the planet for my generation and generations to come.”

Mathur has been praised by Canada’s Museum of Nature for demonstrating to adults just how powerful a child’s voice can be.

In her young life, she has connected with several political and environmental leaders here and around the world, including Prime Minister Justin Trudeau, Catherine McKenna, Canada’s former Environment and Climate Change minister, Jamie Margolin, an 18-year-old Colombian-American climate justice activist and author of Youth to Power, and Kallan Benson, the teenager who co-created Parachutes For the Planet.

“MPP France Gélinas is also an important role model to me and to all young women, really. Her strong support for youth encourages and empowers us. I’ll always appreciate how she brings our voice to Queen’s Park.”

Mathur has perhaps been most inspired by 17-year-old Swedish global activist Greta Thunberg, whom she met in Washington, DC, in 2019 when Thunberg, along with Fridays for Future, received Amnesty International’s highest honour, the Ambassador of Conscience Award.

“In person, Greta is a quiet, kind person who becomes this powerhouse in public. She is such an inspiration to youth around the world. Greta fuels our activism to save the planet not only for us, but for our children and our children’s children.”

Mathur emphasizes that changing our thinking and our habits will make for a healthier world.

The first step young people can take, she said, is connecting with their parents about global issues.

“Start with a family challenge at home, for example, going a week without consuming packaged or processed foods. Parents follow world news so ask them about climate change. You’ll all learn and bond from these experiences.”

Connecting with classmates and teachers is the second step. “Young people have a voice and should encourage change at school.”

Mathur’s high school has an environment class where students are enlightened by ecological presentations.

“We have an eco club and school administration is implementing more and more eco friendly initiatives. Students can ask questions, express their concerns and offer suggestions that will improve and protect the environment.”

Mathur has been working with her teachers to help effect change, and many of her classmates have come on board.

One of the most encouraging examples of change was at her elementary school. As their commitment to reduce plastics, natural wood and metal utensils now replace single-use tableware. Students have also demonstrated their commitment to the environment by planting gardens on school property.

“Even the kindergarteners participate. It’s so important to educate them about the environment at an early age. I remember how the little ones were so fascinated by the array of butterflies attracted to the flower beds. They were learning to appreciate nature in all its wholesome simplicity.”

There’s no doubt that the climate crisis is going to affect our future. You might not be directly impacted, but if you have children it will definitely affect their lives. Climate change is real. Scientists say it’s a problem that can still be resolved, so let’s get out there and make change.  We can all make small changes to start with and then take bigger action. Talk to people. The voices of youth can definitely influence adults to get on board.

Lobby your school to institute improvements that will impact climate change. Just get out there and enlighten everyone in your circle of friends and family and remember that you’re not alone. To our parents, educators and all adults: You’re the policy makers. You hold the decision-making power to implement lasting positive changes.

Growing up, you were able to enjoy life without concern about what is happening to your planet. You didn’t worry about what scientists had to say. Remember your childhood, hiking and biking, going to the beach and just being outdoors. Climate change is stealing our childhood. It shouldn’t be up to us.

We can all be climate champions and do our part to protect the planet for future generations.

Thank you to Cambrian College for helping to expand local news coverage in Sudbury. Learn more