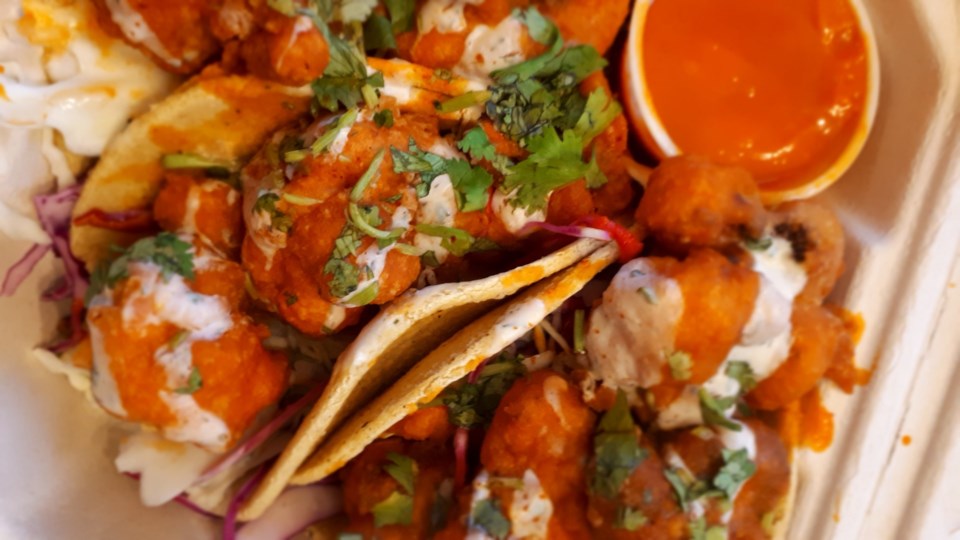 The local Mexican-inspired vegan restaurant describes itself on its website as a “vibrant outpost featuring creative vegan Mexican eats, cocktails & draft brews plus patio seating,” but that sure does not capture all of what it delivers.

It is fun, funky, and always flavourful fresh food.

Oh, yes, let’s say it again, it is vegan. That doesn’t capture exactly what it is either.

Did "Sudbury" say they weren't ready, or were starved for a place like Tucos?

Yes, they came. They keep coming. The clientele?

“Pretty much everyone, all ages,” Browning said.

Do patrons return for the same things week after week or are they experimenting always?

“We get a lot of newcomers from out of town who've heard of us, so they run the gamut. Our regulars tend to have their favourites. Our nachos are super popular and frankly, the best I've ever had anywhere, Mexico included.”

A vegetarian menu surprises some who open the door.

“Yep, and some of them just walk-out when they find out we don’t serve meat.”

Boy are they missing out.  This is bold, beautiful, visually appealing and nourishing food.

When asked what brought him into the world of hospitality and food service, Mark Browning credits his wife.

“My wife is a foodie and a cook, so really it was only a matter of time before we opened a vegan restaurant. The empty derelict KFC property across the street from us was the impetus.”

Yes, you read that right; it used to be a KFC. Browning — and clients, too — find it both amusing and ironic on many levels. Just one more reason Tucos is unique.

“Being vegan, we're naturally activists when it comes to food, so we had the drive to fight the good vegan fight. That gets us through the tough times and the difficulties now and then — the feeling that what we're doing matters. I like to think that everything we can add to our city makes it a better place,  makes young people growing up here more likely to stay here and make their own contributions. You don't have to move to New York to do something cool. Do it here.”

That’s an inspirational idea for a city like Sudbury built by successive new Canadians and multi-generational residents alike.

Repurposed, renovated, renewed “… I didn't realize how unique it was until after we'd opened and we did a little more travelling and found how rare it was. Casual Mexican/Tex-Mex places are a dime a dozen, but what we're doing is better food than most. Jess (his wife) and I are just very picky. She's a writer of a couple of cookbooks. We're both vegan, so that wasn't an 'angle' we just won't do anything that doesn't square with our ethics, so Tucos is vegan. It turns out fresh-made food is a rarity out there. Who knew? I also like to think we showed people that you don't need to eat animals to have great tasting food. The world needs to change and the first step is opening the mind to change and showing that it's possible.”

Browning, whose indie rock band Ox continues to have a dedicated following, and his family also influenced a shift of character on Kathleen Street. Four years ago, Sudbury.com detailed how the Brownings have tranformed their area in a story called "The coolest corner in Sudbury," which you can find here. Where would Sudbury be without Tucos?

“This is my neighbourhood. I've lived here with my family for 15 years now and I never set out to change anything, only to add some things that I myself would like, things that were missing for me: coffee, tacos.

“When I opened Cosmic Dave’s (Guitar Emporium ... on Elgin Street) that really just came from my own passion for music and for the fact that the building I bought to live in had a great store front.

That’s why Cosmic Dave’s Vinyl Emporium (on Kathleen) is here. The Donovan is a great neighbourhood, best in the city — I just like to think we're playing our part to bring a few more things to it so the folks that live here don't have to go elsewhere for the things that I was having to go elsewhere for.

I think we proved a point locally, that Sudbury is a progressive town with lots of people wanting the same things they'd see in Toronto, NYC, etc.”

Everyone wants to know the inspiration for the name of the restaurant. You guessed right if you remember your Clint Eastwood westerns. 'Tucos' comes from the Mexican character “Tuco Benedicto Pacífico Juan María Ramírez” in The Good, the Bad and the Ugly (1966).

“I'm a fan of the old spaghetti westerns and the name just hit a nerve with me so I went with it. I was also a musician prior to getting into the restaurant/retail business and our band’s last record we called 'TUCO' so it’s been in my head for a while.”

Has the menu evolved? What will Browning add or subtract?

“There isn't a menu item at Tucos that I don't love. If there were, we'd remove it. We're always trying to improve things and sometimes we take things off the menu if we think it makes the kitchen crew's lives a little easier when we add other things. We try to balance keeping it authentic — Mexican/Central American food — with just some tasty comfort food (like burgers and mac'n'cheese). We've tried some very 'Mexican' items like tamales, chilaquiles with mixed results. We tend to 'riff' on things we've tried elsewhere or things we've seen and make them our own.”

Beyond the fare, Tucos has a pronounced vibe inside and out.  Of course, the food truck and outdoor seating are closed now on the cusp of winter, but come spring it is sure again to be that magnet for patio life.

“We've always just tried to make it somewhere we’d like to go and hang out.” You and everyone else, Mark Browning.

Hugh Kruzel is a committed foodie and a freelance writer in Greater Sudbury. Are you an advertiser? Learn more about our Community Leaders Program here.

How Zaher’s Small Batch is bringing a yummy family recipe to the masses
Nov 9, 2020 12:00 PM
Comments
We welcome your feedback and encourage you to share your thoughts. We ask that you be respectful of others and their points of view, refrain from personal attacks and stay on topic. To learn about our commenting policies and how we moderate, please read our Community Guidelines.

Thank you to Ashley Homestore for helping to expand local news coverage in Sudbury. Learn more