The media articles and release on the city's website regarding the unveiling states that the policy was developed by the Newcomers, Immigrant Refugee Advisory Panel. With the greatest of respect, this is factually incorrect.
Feb 11, 2019 4:00 PM By: Letter to the Editor 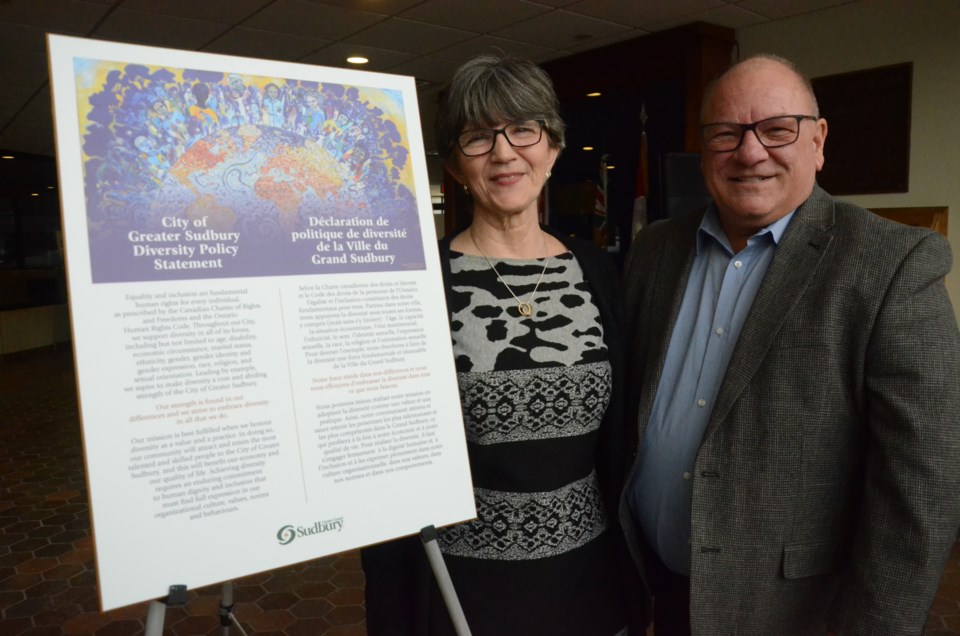 1 / 2 Mayor Brian Bigger and Ward 9 Coun. Deb McIntosh, co-chair of the Newcomer Immigration Refugee Advisory Panel, show off the new Diversity Plaque that will act as the city's promise to accept the differences every resident, regardless of where they come from. (Arron Pickard)

I wish to bring to your attention an error in your articles discussing the City of Greater Sudbury's Diversity Policy Statement posted online in January.

This is a policy drafted and developed by the former City of Greater Sudbury Diversity Advisory Panel back in May 2014.

As the past Chair of the former Diversity Advisory Panel in 2014 with the City of Greater Sudbury, I am pleased to see in the news the unveiling of this beautiful plaque presenting the city's Diversity Policy Statement.

Since I am currently away on vacation, I was unable to accept the mayor's invitation to personally attend the unveiling at Tom Davies Square. Almost four years after city council unanimously accepted the Diversity Policy Statement, I am very grateful to Mayor Brian Bigger and Coun. Deb McIntosh for their efforts in seeing this through after so many years of discussions and for taking the promotion of the city's Diversity Policy Statement to another level.

I do have one small correction to pass along if I may. The media articles and release on the city's website regarding the unveiling states that the policy was developed by the Newcomers, Immigrant Refugee Advisory Panel. With the greatest of respect, this is factually incorrect.

While the plaque and artwork selection were indeed prepared by Coun. McIntosh and the Newcomer, Immigrant and Refugee Advisory Panel, and the vision to have it posted in municipal buildings a product of Mayor Bigger and Coun. McIntosh's ongoing dedication to promote education on diversity and inclusion, the diversity policy and statement itself was drafted and brought before council by the former Diversity Advisory Panel in May 2014.

As the then chair of the former Diversity Advisory Panel, I can advise that our group discussed the content, relevant scope and target audiences across the City of Greater Sudbury for many months before finally agreeing to the final version that is now inscribed on the plaque today.

With permission from two other Canadian municipalities and one non-profit community agency in the United States, we took portions from their respective diversity policies to form our own local framework.

We also wanted to ensure that the spirit of this document was somehow grounded in law, hence the explicit references to human dignity, the Charter and the Ontario Human Rights Code.

Making the connection with diversity and inclusion to the economic benefits was also an important aspect of the document, to persuade the skeptics that may be opposed to such a vision. It was only after we were finally able to strike this right balance that we then decided to go before council in May 2014 with our motion that was passed unanimously.

The mayor and Coun. McIntosh then invited me to speak to the Newcomers, Immigrant and Refugee Advisory Panel about this policy statement, and when I did, I explained to them the purpose behind the document and how it came to be drafted in its final version. I am delighted to see them, along with local Sudbury artist Sarah King Gold, take this all to another new level.

The former Diversity Advisory Panel drafted, negotiated and reflected upon the content of the Diversity Policy and Statement and made it Sudbury's own local statement on diversity and inclusion. As the past chair of the Diversity Advisory Panel, I will always appreciate how all of the panelists came together on a sensitive issue to provide us with their input on the final product as we presented it to council in May 2014.

The mayor and Coun. McIntosh have reached out to our local community, including myself, and are leading by example by following through with their commitments. This is exactly what the former Diversity Advisory Panel members were hoping for years ago. I am very grateful for their personal commitment on this front

Leonard Kim
Past chair of the former Diversity Advisory Panel