'A little sunshine': Facebook groups connect Sudburians helping each other through COVID-19 pandemic

Some people offer up donations, while others asking for advice on applying for EI
0
Apr 8, 2020 5:00 PM By: Heidi Ulrichsen 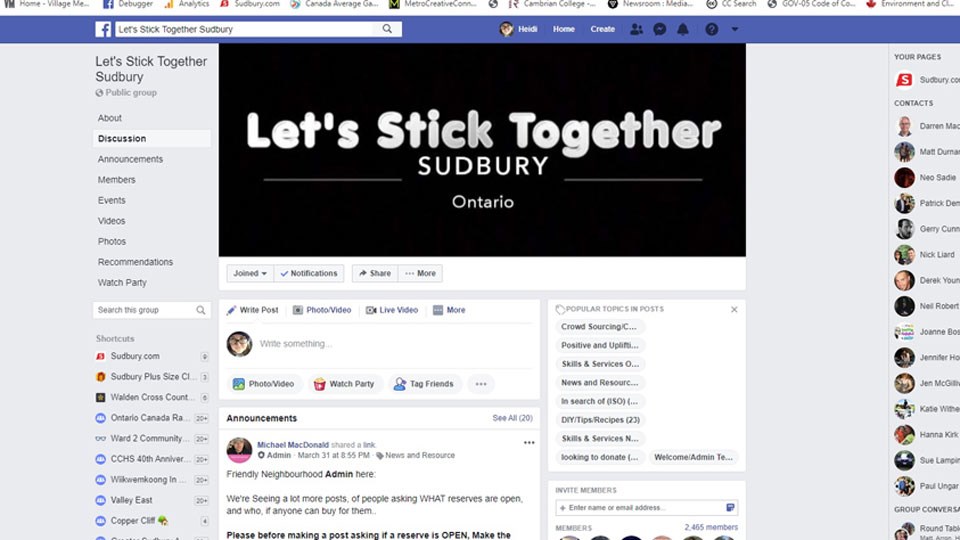 As Sudburians try to adjust to the “new normal” of the COVID-19 pandemic, a couple of Facebook groups have been created to help people cope.

One of them is called “Let's Stick Together Sudbury,” and was created by Corissa Green about three weeks ago. It now has 2,760 members.

A scroll through the posts turns up everything from tips on where you can purchase hand sanitizer or cleaning wipes to requests from those in self-isolation for people willing to do grocery runs to people offering up donations of food and other supplies to questions about accessing EI.

Green said one member is a teacher who puts together lesson plans for students, while another member posts a daily workout video.

“It's just a lot of people helping each other,” she said, adding she is “humbled” by “how many people are willing to help, to drive to the outskirts of town to drop off groceries for people and whatnot.

“I think it's an altruistic thing where people just feel good helping somebody else when they have the means to do so.”

She said she also makes posts in the group, asking for people to share the positive things in their lives. “It just kind of spreads just as quickly as a virus,” she said.

Green said one of the best stories she's come across so far was a woman who sent her a private message, saying she had a couple of brand-new sets of Legos she wanted to give to a family in need.

She contacted one of the group's members — a mother of two little girls — asking if she wanted the Legos, and her daughter's boyfriend was planning to drop off the toys (contact free, of course).