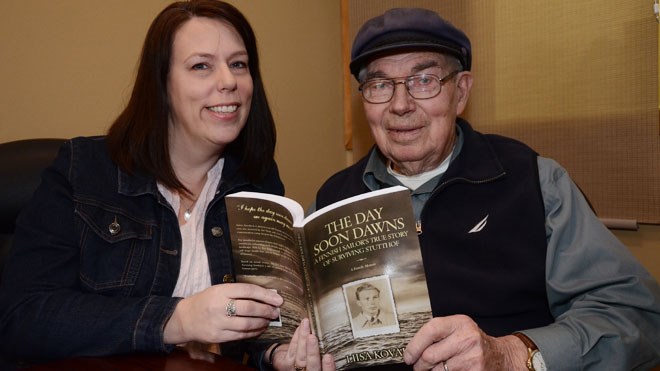 Liisa Kovala wrote a book about her father Aarne Kovala's survival in a German concentration camp as a prisoner of war. Photo by Arron Pickard.

Liisa Kovala grew up listening to her father Aarne Kovala's stories about the Second World War.

A Lockerby Composite School English teacher with an interest in creative writing, Liisa decided she wanted to record her 86-year-old father's experiences while she still could.

The result is the self-published book “The Day Soon Dawns: A Finnish Sailor's True Story of Surviving Stutthof.”

“It's really quite an unbelievable story,” said Liisa, who spent six months interviewing her father before writing the book. “There's so many times where you imagine nobody could survive that, but he continued on somehow.”

War first touched Aarne's life in early 1940, when he was just 11. His hometown of Oulu, Finland, was bombed by the Russians during the Winter War.

When he was 15, he went to Helsinki to find work, and ended up joining the Finnish merchant marines. He worked aboard a ship called the Wappu, delivering war materials between Finland, Poland and Germany.

Finland had been allied with Germany, but that alliance ended after the signing of the Moscow Armistice in September 1944.

Unfortunately for Aarne, just 16 at the time, his ship was captured by the Germans shortly afterwards while docked in German-occupied Gdansk, Poland.

He and about 90 other merchant marines were transported to the nearby Stutthof concentration camp, a notorious facility where it's estimated more than 85,000 people died.

In early 1945, with the Russians advancing on the camp, the Germans evacuated Stutthof, forcing their prisoners on a death march to a temporary camp. Many people died along the way when they became too tired to go any further.

At one point, the Russians caught up with the prisoners, and instead of liberating them, they started shooting them.

In the confusion, Aarne and some fellow prisoners escaped, but were caught when they tried to steal food, and were returned to Stutthof.

Upon arrival, Aarne was able to sneak back into the camp unnoticed, and thus avoided being shot by the Germans because he'd escaped.

One day, while building trenches for the Germans, Aarne again escaped his captors and headed for the seashore to see if he could get away, but realized he couldn't.

“It was so nice,” he said. “There was a big beach there. The waves were hitting the beach so nice there.

“I heard somebody talking. They were German. They had a watchtower. They didn't see me. I just end up sneaking back to the camp.”

With the Germans increasingly cornered, Stutthof was again evacuated, but this time by sea. On April 25, 1945, Aarne boarded a barge to Neustadt, Poland.

What followed was chaos. Aarne was able to get off the barge in Neustadt on May 3, but many other prisoners were slaughtered by the Germans, or otherwise died on their ships in British bombings. In total, about 7,000 prisoners died that day.

After the area was liberated by the British, Aarne and fellow survivors broke into a nearby milk factory, where they found bags of sugar, a real treat for the malnourished men.

“The first night in freedom, I was sleeping underneath the table, on top of a sugar bag,” he said.

With the help of the Red Cross, Aarne was transported first to Denmark, and then Sweden. He was reunited with his parents in Finland on his 17th birthday.

Aarne immigrated to Canada in 1951, where he settled in Sudbury, married, and had four children.

He said he's pleased to have worked with his daughter to tell his story.

“It's kind of exciting,” Aarne said. “It's so nice to let kids know what happened to me when I was young.”

A book launch for “The Day Soon Dawns: A Finnish Sailor's True Story of Surviving Stutthof” takes place from 1-3 p.m. April 19 at the ParkSide Centre.

The book, which costs $19.99, is available for purchase online at CreateSpace and Amazon, as well as locally at Leinala's Bakery.

Check out these great upcoming local shows
Feb 14, 2020 6:00 PM
Comments
We welcome your feedback and encourage you to share your thoughts on this story. We ask that you be respectful of others and their points of view, refrain from personal attacks and stay on topic. To learn about our commenting policies and how we moderate, please read our Community Guidelines.