Answering to the Lure of the North

Kielyn and Dave Marrone felt the Lure of the North — and have now become fully consumed with it. Both the husband and wife grew up in southern Ontario before travelling north for school.
Mar 9, 2013 3:56 PM By: Jenny Jelen 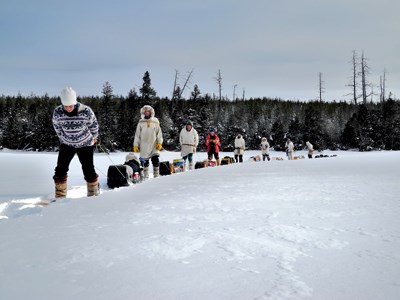 Lure of the North is a local winter camping company that believes in doing things the old-fashioned way. Supplied photo.

Kielyn and Dave Marrone felt the Lure of the North — and have now become fully consumed with it.

Both the husband and wife grew up in southern Ontario before travelling north for school. Since graduating from Laurentian University's Outdoor Adventure Leadership program, the young couple has taken their love of the outdoors to the next level.

In 2010, the duo set out on a 40-day snowshoe trek, covering about 250 kilometres. When they arrived home, they knew exactly what they wanted to do.

That's when their traditional winter camping adventure company was born. Lure of the North offers explorers the opportunity to embark on overnight wilderness adventures through the sub-zero North, as well as the chance for explorers to learn to make their own camping tools through fall workshops. They also sell traditional camping gear, like handcrafted wooden snowshoes, moccasins and other winter apparel.

Their bread and butter, however, is their snowy expeditions throughout the North.

“We have a love of the outdoors,” Dave said. “We didn't want to quit camping just because it got cold out.”

The couple recently returned from a 10-day trek through the Missinaibi Headwaters, north of Chapleau, where they led seven other travellers from the Canadian Pacific rail line to the CN line.

Breaking through uncharted territory, they ventured more than 100 kilometres along Barclay Bay, lugging 10-foot toboggans behind them the entire time.

“Dropped off in what seemed like th middle of nowhere,” the group of nine began hiking right away. After a few hours, they set up camp for the night. Kielyn said it took an average of three hours to build camp — to set up tents, to get the wood stove crackling, to chisel through ice to obtain fresh water and to lay down beds of boughs. Once the work is done, however, campers could comfortably lounge in T-shirts and shorts.

“This is so civilized,” Kielyn said, quoting many of the campers along for the experience. While their temporary forest homes can be quite comfortable, they certainly require a tremendous amount of work. Dave said the average day lasts between 16 to 17 hours. This particular trek was more challenging than most because of the many portages. Dave said on at least 12 occasions, the group had to find a pathway around rapids in the river. It would typically take four to six people to move a single toboggan around the route, greatly slowing down the rate at which the crew progressed.

“You are essentially working whenever you're not sleeping,” he said.

However, the opportunity to “see an untouched canvas of snow” made the challenges worthwhile.

Having a strong working knowledge of the art of winter camping helps, too.

“The traditional way is the most comfortable way to travel in the winter,” Kielyn said. As long as explorers are open to “stepping back,” they'll manage the trek just fine.

“You have to allow yourself to revisit the past,” she said.

What made this trip — which was one of three adventures lasting longer than eight days for the Marrones — was that they got to share it with Garrett Conover. Conover is “a legend in this type of travel,” having penned the manual on winter camping.

“It meant a lot (to us) for him to do us the honour of coming on a trip with us,” Kielyn said.

Both she and Dave learned a lot from reading about Conover, and even more from him in person.

“You could see his deliberate, methodical pace,” Dave said.

The trip from rail line to rail line marked the end of Kielyn and Dave's extended winter outings. Now, they plan to focus on creating a documentary from the adventure, thanks to a grant from the Laurentian University's Alumni Association. A videographer was part of the crew's team, capturing the adventure from start to end. Stay tuned to find out more about the finished film.

For more information about Lure of the North, visit lureofthenorth.com.