Manitoulin Island painter Ivan Wheale said the various landscapes around the Sudbury area are an inspiration to artists. He was at Artists on Elgin Sunday hanging up his latest paintings for his month-long exhibition.
Sep 30, 2009 7:50 PM By: Bill Bradley 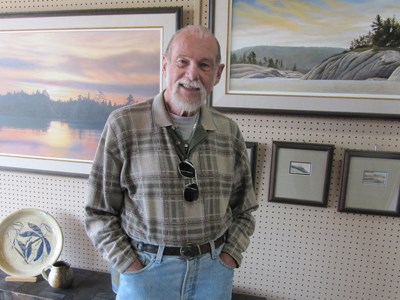 Painter Ivan Wheale, who is exhibiting his work at Artists on Elgin this month, said the northern landscape is a fantastic place to paint and to be inspired. For more information, phone Artists on Elgin at 674-0415 or visit www.artistsonelgin.ca.

Manitoulin Island painter Ivan Wheale said the various landscapes around the Sudbury area are an inspiration to artists. He was at Artists on Elgin Sunday hanging up his latest paintings for his month-long exhibition.

A reception with the former Sudbury resident will be held Oct. 3 at 1 p.m. at the gallery.

Wheale, 73, said it is a little known fact that members of the Group of Seven painters used local sites, such as Killarney, Manitoulin Island and the North Channel, as backdrops for their work. “I met A. Y. Jackson in the early 1960s in Toronto. We talked about painting.”

Wheale said Jackson, and the other Group of Seven landscape artists, created hundreds of paintings and sketches based in the mid-north region.

“He (Jackson) was fond of the Willisville and the Killarney area. The area from south of the French River to this side of Sault Ste. Marie is fantastic for artists who like that type of landscape.”

But landscapes may not have all the elements for a good painting, Wheale explained. He said that in one of his works, which was created at a North Channel site, the light was not right, so he changed the time of day.

“I got to this site by boat. Sometimes you cannot be there when you would like because of the weather conditions.

So in this case, I took a photo and made a sketch. Then back at the studio, I added what I thought were the right elements. That is where the creativity of the artist comes into play.”

Before he arrived in Canada, he had been painting at his home in England as a youth. “I was sketching men working on the ships in the shipyard where I used to work. I would do the paintings in the attic of my family’s house.”

In Sudbury, while working for Carrington’s Lumber in the flooring department, he kept up the painting. “I went to Toronto for a Vincent Van Gogh exhibit. I saw that on a Saturday and quit my job on the Monday. My boss said I would never make it. But I have painted professionally ever since.”

He took no courses and is completely self-taught. Though times were tough enough to require harvesting bottles from ditches to feed his family in the early days, he thinks everyone contains an artist within. “I think anyone can paint. You just have to bring out the creativity within.”

“I get up early and usually paint six to seven hours a day, sometimes up to 12 hours. It is something I love to do,” he said. But he has no time for marketing his work. “I let the galleries do that.”

He calls his style of painting realism. “I differ from the Group of Seven because my work has no abstract elements. It is realism. I used to try abstract painting when I was younger. I even set fire to a canvas to watch the paint bubble,” he laughed.

Wheale has nine original oils and 30 original watercolour miniatures for sale at Artists on Elgin. His paintings can still be purchased after his show.

With the support of the Rainbow and District School Board, he has gone into area schools to work with youth.
“Some of their work is quite good.”

He had some advice for the young painters. “You have to be your own worst critic. I will destroy my work if it is lacking. It may fool some people but it will not fool me.”