These are just a few tidbits about the Canadian literary icon revealed Nov. 19 during the last annual “An Evening with Margaret Atwood” event.
Nov 20, 2014 9:07 PM By: Heidi Ulrichsen 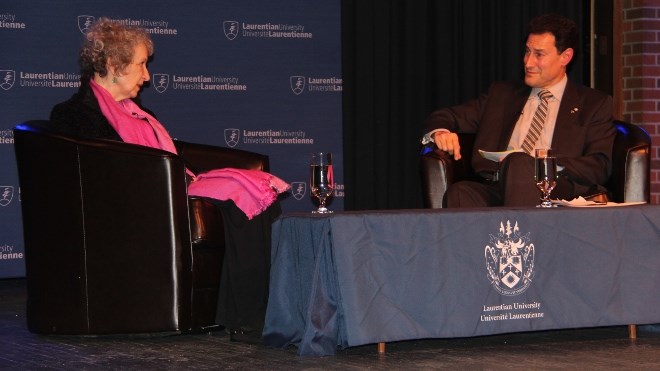 Canadian author Margaret Atwood chats with Laurentian University chancellor Steve Paikin who also happens to be the host of TVO's “The Agenda,” at the university Nov. 19. She was there for an event in honour of her 75th birthday. Photo by Heidi Ulrichsen.
These are just a few tidbits about the Canadian literary icon revealed Nov. 19 during the last annual “An Evening with Margaret Atwood” event.

The evening featured a lively hour-long question and answer session with Atwood, led by Laurentian University chancellor Steve Paikin, who also happens to be the host of TVO's “The Agenda.”

With Atwood marking her 75th birthday Nov. 18, she's indicated this will be the last time she'll participate in the event, and thus the university has opted to make this year's birthday bash the last.

Laurentian librarian Ashley Thompson, who MCed the event, had a bit of fun at Atwood's expense, welcoming those gathered at the Fraser Auditorium to “Margaret Atwood's last birthday,” to the laughter of the crowd.

Those gathered for the event sang “Happy Birthday” to the prolific author not once, but twice — the second time accompanied by local accordionist Iona Reed, who herself recently celebrated her 75th birthday.

Atwood's admission of being a red Tory came about as Paikin questioned her on her thoughts on Toronto's mayor elect, John Tory, saying the author and the politician are “very similar,” politically.

“If I may say, you're both red Tories, I think,” Paikin said, with Atwood replying “I suppose,” adding Tory probably won't make the kinds of headlines Toronto's current mayor, Rob Ford, has made.

“Let me quote Bill Davis, who was one of the most successful premiers this province had had,” she said. “People said to him 'Why are you so bland?' He said 'Bland works.'”

Atwood also made a few zingers about the Ford brothers.

Paikin questioned her about Doug Ford's reaction to her opposition to his plan to cut library budgets. Ford failed to realize the “little guy” he counted upon for support used libraries, Atwood said.

“What did Doug Ford not get about that?” Paikin asked. “I don't think he'd ever been to the library,” Atwood said, although later adding the Fords aren't “inherently dumb,” as they know how to appeal to voters.

Paikin also asked her about her friendly relationship with Conrad Black, remarking on the friendship's unlikely nature.

Although the former newspaper publisher and author was convicted of fraud in the United States, Atwood said she's not convinced of his guilt. She said his arrogant manner may have influenced the jury in the trial.

“He has been on the habit of saying 'How could anybody be so fatuous and stupid?'” she said. “He is quite fond of his own opinions. You can take objection to that, but you shouldn't put somebody in jail for that.”

Atwood, who appeared on Ghomeshi's show, “Q,” several times, said she had no real inkling about his alleged nefarious activities, although she'd heard from younger women that Ghomeshi was “creepy.”

“First of all, I'm not in the age group that he favours,” Atwood said. “I'm also quite athletic. I don't think he ever took on any shot-putters or long-distance canoers and tried socking them in the nose.”

On a more serious note, though, she said the situation has facilitated an open discussion about sexual assault.

“I'll admit Laurentian has been known to brag a little bit now and then about this very special friendship,” he said.

“So we're delighted to have had these years of celebration with you, Margaret. You have inspired our students, you've energized our university community and you've enriched every one of us.”

The event's proceeds have been channelled to the university's Margaret Atwood Scholarship, but the scholarship fund would have become depleted with the event not continuing past 2014.

The Laurentian University Alumni Association announced during the event it will ensure the scholarship fund's viability, donating $10,000.