Patrons who waited until just before Saturday evening’s concert to purchase tickets for the Sudbury Symphony’s “Classical Cheer” concert were almost left disappointed, as close to 1,200 audience members came for the Orchestra’s annual Christmas celeb
Dec 1, 2014 5:36 PM By: Sudbury.com Staff 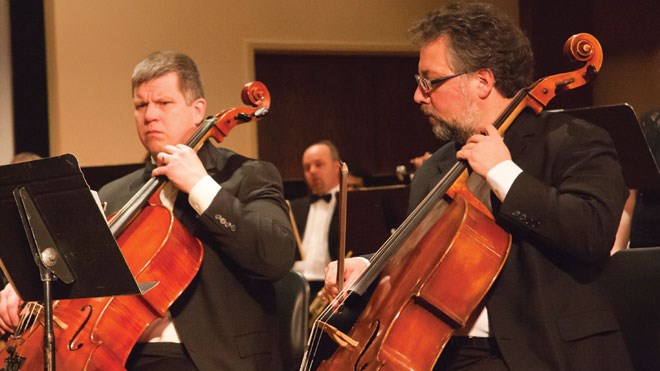 Sudbury Symphony Orchestra is celebrating the recent spike in attendance at its concerts. Supplied photo.
Patrons who waited until just before Saturday evening’s concert to purchase tickets for the Sudbury Symphony’s “Classical Cheer” concert were almost left disappointed, as close to 1,200 audience members came for the Orchestra’s annual Christmas celebration.

“Our parking lot was filled to capacity,” executive director Dawn Cattapan said, in a press release. “At one point this evening, patrons were lined up through the lobby to buy tickets.”

This is the second concert this season where attendance for the Orchestra’s one-night-only performances have reached more than 1,000.

With the SSO’s and YES Theatre’s co-presentation of "Les Miserables: In Concert" still to come Dec. 17-19 and expected to sell out, this upward trend for the Orchestra shows no sign of slowing down.

“This year, our theme is ‘Our Sound. Our Symphony.’” said Cattapan. “More than ever, we’ve looked to our community for inspiration, because there’s nowhere else we’d rather be performing. And clearly, people are responding.”

In addition to high attendance at each concert, the SSO announced earlier this year that their subscription base had increased for the first time since the 2008-2009 season. The orchestra also continues to grow in popularity with young professionals now making up approximately 10 per cent of SSO patrons, due to the Vale Amped Up! program, a discount ticketing program for those aged 29-and-under.

Those looking to purchase tickets for the remaining four concerts of the SSO’s 2014-2015 season, or for their Special Presentation of Les Miserables: In Concert can do so by phoning the Orchestra’s box office at 705-673-1280, or visiting their website at sudburysymphony.com.