Graffiti that once decorated Bell Park will be forever remembered in Swampy Jo, a novel by former Sudburian Jennifer Rouse Barbeau. “Although Sudbury isn’t mentioned in the story, it is absolutely geographically bound to the Sudbury area,” she said.
0
Oct 4, 2010 7:08 PM By: Jenny Jelen 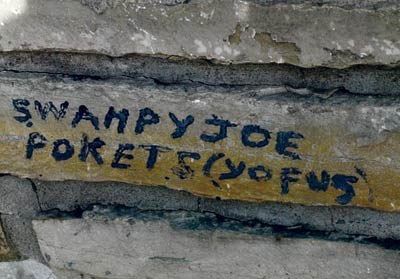 “Although Sudbury isn’t mentioned in the story, it is absolutely geographically bound to the Sudbury area,” she said. “The whole story hinges on graffiti in Bell Park that’s been there for decades.”

Rouse Barbeau said she remembers being a teenager reading words like Swampy Jo, Pokets and Yofus on rocks in the park. When she brought her daughter back to Bell Park years later, the two discussed some of the graffiti that remained. “(My daughter is) the one who came up with the fact that Swampy Jo was a girl,” Rouse Barbeau said. “She was nicknamed Swampy Jo because she was dirty. “

The novel, aimed at young adults 11 years and older, is about a young teenage girl who was abandoned by her family and is trying to figure out why.

“It’s the story of somebody trying to make their way through a minefield of secrets and find herself on the other side,” Rouse Barbeau said.

She said the novel deals with a lot of dark issues, but “it is a story of hope.”

“The book does talk about eating disorders, depression, anxieties and mental health issues like that,” Rouse Barbeau said. “It does flirt with the idea of suicide.”

She said Swampy Jo is also a quirky, hopeful take on overcoming challenges.

“It starts in a state of despair, and it’s the story of a young girl realizing what she has to bring to the world is essential.”

Rouse Barbeau began working on the novel in 2000, and has edited and adapted it several times since then.

The author now lives with her family in Sturgeon Falls and teaches advertising and creative media at Canadore College.
Swampy Jo is available at Indigo bookstores, Chapters and at the Grand Ciel Bleu Librairie du Nouvel-Ontario, located at 93 Durham St. in Sudbury.

For more information, visit the Swampy Jo page at www.scrivenerpress.com.