Best of Hot Docs returns to Sudbury in November

The Nov. 6-9 festival will instead be held at a number of downtown venues — at the downtown library, Sudbury Secondary School's Sheridan Auditorium and Cambrian's College's Open Studio.
Oct 14, 2014 7:38 PM By: Heidi Ulrichsen 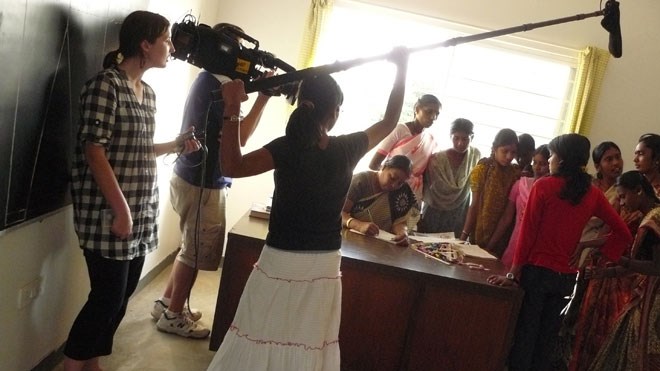 The documentary "The Backward Class," which focuses on students in Bangalore, India who imagine a future that defies their “untouchable” caste, is one of the films set to be screened during the second annual Best of Hot Docs Sudbury festival, which runs Nov. 6-9. Supplied photo.
The Nov. 6-9 festival will instead be held at a number of downtown venues — at the downtown library, Sudbury Secondary School's Sheridan Auditorium and Cambrian's College's Open Studio.

Mairs — whose film production company, BAM North Productions, is putting on the showcase with the indie cinema group — said she was inspired by Belleville's Downtown DocFest, which also uses a variety of downtown venues.

“They're just showing in libraries and other rooms with uncomfortable chairs, small screens, and yet the place is packed,” she said. “There's a real vibrancy to this festival.”

Such events are held across Canada, but “our showcase would be the most ambitious that's going,” Mairs said.

A few filmmakers are even planning to attend, including Madeleine Grant, whose film “The Backward Class” is being screened at 4 p.m. Nov. 9.

The documentary, which focuses on students in Bangalore, India who imagine a future that defies their “untouchable” caste, won the audience choice award at Hot Docs.

Another guest is Matthew Bauckman, whose film "Kung Fu Elliot" will be screened starting at 7:30 p.m. Nov. 8. The film is about a quirky cast of characters who make low-budget martial arts films.

Several films have been paired with Sudbury community groups with an interest in the subject matter.

For example, the film “Out of Mind Out of Sight,” examining mental illness survivors who have committed violent crimes, has been paired with the Northern Initiative for Social Action (NISA).

The entries in NISA's own short documentary film contest — illuminating the lives of those with lived experience of mental illness — will be shown before the main feature screens at 7 p.m. Nov. 6.

Passes cost $60 until Oct. 25, when they increase to $75. They're available at www.eventbrite.ca by searching for “Best Of Hotdocs - Sudbury 2014” or at the downtown library.

For the festival's full schedule, visit www.bamnorth.ca or search for “Best Of Hotdocs – Sudbury 2014” on Facebook.