Sudbury had a visit from popular Bollywood singer Kamal Khan last week. The concert was organized by Chaudry Ahmad, who owns Tandoori Tastes, an restaurant in the downtown core that serves Indian cuisine.
0
Apr 8, 2016 12:33 AM By: Sudbury.com Staff 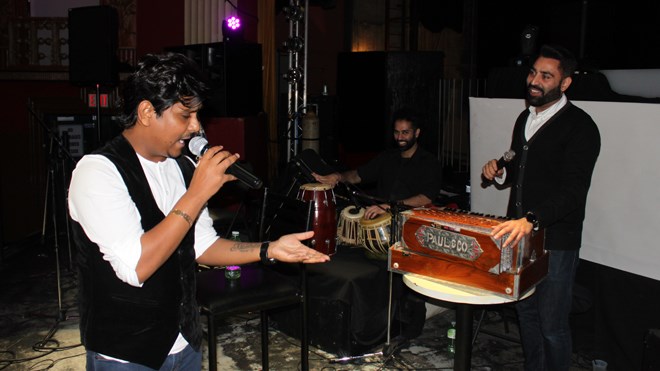 The concert was organized by Chaudry Ahmad, who owns Tandoori Tastes, an restaurant in the downtown core that serves Indian cuisine.

Ahmad was originally going to hold the concert at the restaurant, but so many people wanted to attend, he had to move the venue to The Grand.

“Close to 200 people enjoyed this concert which lasted for almost three hours,” a press release said.

“Kamal Khan sang some Bhangra songs as well, for which a typical beat of a Dhol (Indian Drum) is used. That made audiences go on their feet and everybody couldn’t help but dance.

“A big group of newly arrived students from India at Cambrian College attended this event as well, who couldn’t believe their luck that this kind of gathering was even remotely possible in a place like Sudbury.”

Given the response, Ahmad told NorthernLife.ca the city could expect more of these, inviting mainstream artists from India and Pakistan to perform in the Nickel City.

Sudbury dad's unbelievable trick shot videos are a welcome pandemic distraction
May 27, 2020 2:45 PM
Comments
We welcome your feedback and encourage you to share your thoughts. We ask that you be respectful of others and their points of view, refrain from personal attacks and stay on topic. To learn about our commenting policies and how we moderate, please read our Community Guidelines.