A quiet chime sounds as the door to Cosmic Dave’s opens. The noise alerts Brian Dunn , who casually wanders out from the recording space in the back in the guitar shop.
Jun 13, 2012 7:05 PM By: Jenny Jelen 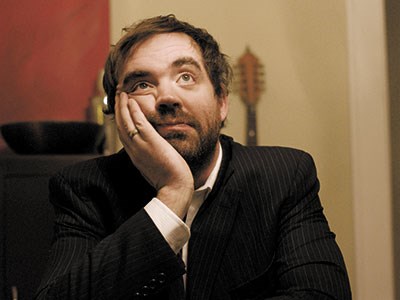 Sudbury’s own Brian Dunn is about to release TVs and Radios across Canada.The album is his second solo project. Catch him at the Towne House June 15 before he embarks on a Western Canada tour. Supplied photo.

A quiet chime sounds as the door to Cosmic Dave’s opens.

The noise alerts Brian Dunn, who casually wanders out from the recording space in the back in the guitar shop.

We politely greet each other before he makes himself comfortable behind the counter, pressing play on a YouTube video which fills the room with pretty guitar music. After making up a few playful stories about his alternate life, he begins to talk about TVs and Radios. The 13-track record is his second solo album. It will be released nationally June 19 at Cosmic Dave’s Record Factory.

When asked about the final product, Dunn said he was “very happy — over the moon,” in fact. Dunn, who worked alongside producer David MacKinnon on the album, said he took his time on it. That “comfortable” process added to the end result, he said.

“In a lot of ways, it’s exactly how we pictured it,” Dunn said.

While most of it was written while Dunn was away from home, touring his first album, there is a distinct taste of the Nickel City.

“Maybe that’s the thrill of the whole record — going back to that theme,” Dunn said. “I believe in Sudbury. There’s something special here.”

Dunn said this process was typical of how he writes: inspired, in theory, but not so much in application.

“I think I make a lot of (stuff) up,” he said. “You run out of (ideas) talking about yourself all the time.”

If you’re going to make music, you have to do everything you can to make sure it gets to everybody.

Considering the amount he writes, it’s a reasonable statement. Throughout the last five years, Dunn has kept himself musically engaged by playing with the likes of November Allstars and Ox. Following a year-long break, he said he’s happy to be back at it.

On June 15, Dunn is beginning a 20-date tour with a Towne House gig. Being on the road is important to Dunn — this time, he’s looking forward to it, too.

“I’m going with a band, and that’s kind of exciting,” he said. “It’s fun to have the company.”

He said the van will be packed with MacKinnon as well as Matt Foy, Jon Danyliw, Matt Beech and an air freshener for the 20-date tour, which goes to the west coast and back in time for Northern Lights Festival Boréal, before wrapping up a few southern Ontario shows.

“If you’re going to make music, you have to do everything you can to make sure it gets to everybody,” Dunn said. “You can’t do that if you stay home.”

Dunn’s kickoff hometown show gets going around 10:30 p.m. on June 15. Cover is $7 at the door. For more information about Dunn, visit briandunn.ca.

This Sudbury-North Bay family's wish if they won Family Feud Canada? A Zamboni
Mar 7, 2021 9:00 AM
Comments