Public response has been enthusiastic say the owners of Northern Axperts on Cedar Street
Feb 8, 2017 10:00 PM By: Darren MacDonald 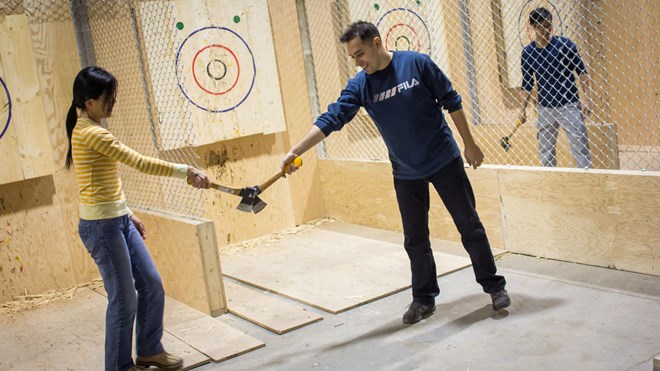 Fond of darts, but always wanted to throw something a little bigger? Next month, Greater Sudbury will welcome a new business to town, as well as a new sports league: axe throwing. Photo from batlgrounds.com.

Fond of darts, but always wanted to throw something a little bigger?

Next month, Greater Sudbury will welcome a new business to town, as well as a new sports league: axe throwing.

Already popular down south – there are several locations in Toronto and Montreal – a side room at Peddler's Pub in Sudbury will soon host Northern Axperts, the city's first axe-throwing lounge.

Entrepreneur Kelsey Cutinello and Peddler's owner Dennis Gainer are partners in the enterprise, with the grand opening set for March 1.

"Haha! Very clever. I'm going to have to use that," Cutinello groaned, when I said I wanted to “axe” her a few questions about the business.

Cutinello has a friend who competes in an axe throwing league down south, and Gainer asked her what she thought about bringing it here.

"I said I thought it was a great idea," she said. "So we we crunched the numbers, figuring out if it would make sense in the side room at Peddler's. And luckily for us, it did."

The room is being set up according to guidelines from the National Axe Throwing Federation, which has a number of safety and other rules.

"We're following all their specifications to become a member and host the tournaments and report our stats to this organization," Cutinello said. "We had to ensure we could fit regulation-sized throwing lanes at Peddler's according to NATF.

"And it worked out, we'll have four targets in the side room at Peddler's. It is licensed, but of course you can't have drinks when you're actually throwing an axe."

Half the room will be the throwing area, the other half a lounge, she said. You must book in advance to play and be a group of four or more ages 18 or older.

The league will start up in April for a seven-week season.

"There's only 32 spots available,” she said. “They have been filling up very quickly and we're really happy about that."

Each group is monitored and trained by axe-throwing coaches, who ensure that groups are playing safely.

"They explain how to play the game, how to keep score, the do's an don't's, how to work on your throwing technique, and make sure you're doing everything right to try and hit the target," Cutinello said.

"All of our staff have their smart serve training, so they know about detecting signs of intoxication. Obviously no one who's not fit to play will be allowed. All of our staff are trained in First Aid."

The room itself is set up to safety specifications – for example, there's a barrier behind you, fencing separating the throwing lanes, as well as safety rubber on the floor so axes don't bounce upward if they miss the target.

"Basically, it kills the momentum of the axe," she said. "So all the safety precautions have been put in place to make sure everyone plays safely."

You must to sign a waiver before you play, and all the safety rules are reviewed before you begin.

While it's new, Cutinello said the response so far in Sudbury has been much stronger than they expected. Many people are telling them they have been doing this for years at camp or in their backyards and are excited to be able to join a league.

"We've had tonnes of people applying to become axe-throwing coaches, tonnes of people joining the league and making bookings," she said. "It's going over really, really well. Our bookings are going very, very quickly. March is filling up fast, so it's going to be a very good grand opening month."

If demand stays strong, they could move to a dedicated building, most likely a warehouse, which most facilities in Toronto are located.

"That's definitely something that could happen sooner rather than later,” Cutinello said. “If it keeps going the way it is now, we will definitely need a larger location."