“You have an eight-year-old son that you're already making music with,” I said from a corner table inside Jube's Bar and Grill in Copper Cliff. “That's got to be pretty cool.
Mar 24, 2013 8:19 PM By: Jenny Jelen 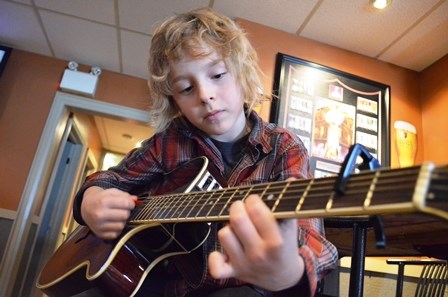 Evan Newell-Barrette, the eight-year-old son of Lara Newell-Barrette and musician Sean Barrette, has begun a musical journey of his own. The little guy recently came up with a melody and some chords for a song that his dad liked so much, he decided to put it on his upcoming album. Photo by Jenny Jelen.

“You have an eight-year-old son that you're already making music with,” I said from a corner table inside Jube's Bar and Grill in Copper Cliff. “That's got to be pretty cool.”

Before I interviewed Evan Newell-Barrette, his dad Sean Barrette warned me the little guy might be a bit shy. That's usually the case with kids, but I figured it was still a cool story and, even if I had to pull words from the junior rock star's mouth, it could work.

About eight seconds into our conversation, I found I had nothing to worry about.

“Yeah,” Sean Barrette responded, before taking a pause to think about his answer.

That's when little Evan jumped in.

The aspiring young musician has been taking guitar lessons since he was five. Last year, he began working with local musician, Don Kunto, who infused the learning process with fun.

Evan learns “something new practically every day” he works with Kunto. He's figured out how play Christmas songs, “the White Stripes songs,” and his favourite, Learned to Surf by Superchunk.

“He's a great kid, lot of energy and quite the charming demeanour for his age,” Kunto said. “I'm sure that his dad has something to do with it, but he's into some great guitar music to begin with, which helps immensely.”

While Kunto has provided Evan with the tools for progression, the youngster said watching his dad make music was his initial inspiration. Two years ago, Barrette released his first album, Live Through This. Watching him create music and enjoy the process made Evan curious enough to try it too.

One day, the Grade 3 student at Copper Cliff Public was goofing around with his guitar when he put together a rhythm, a few chords and a melody that caught his dad's ear.

Now, that song is going on Barrette's sophomore album.

“I basically came up with everything, but the words,” Evan said.

Sean said he was blown away by the unique sound his son had created.

“It was really different,” he said.

The little guy had used a capo, which typically snaps onto the neck of a guitar to raise the pitch, in an unconventional way. Instead of using it across all six strings, he only clamped down on the top four. When Barrette tried to tell Evan that wasn't the way it was done, the little guy wouldn't hear it.

So that's the way it went.

The more Barrette thought about his son's wacky capo placement and floating melody, the harder it was to get it out of his head.

“Then, I had to fess up — I had stole his song from him,” Barrette said, laughing.

He did, however, promise Evan a writing credit for the song, “Signs.”

“Eight-year-olds aren't bound by limitations, because they haven't had (creativity) taught out of them,” Barrette said. “If you approach it like a kid would, you might come up with something cool.”

Barrette will be recording the tune, and the rest of his second album, at Cosmic Dave's at the end of March. He's hoping to have the finished product out in time for summer.

While Evan won't be playing on the record, he does hope one day to accompany his dad — maybe when he's a bit older. Like when he's 10.

“It's a family affair,” Barrette said. “I like having him around.”