Crestfallen Theatre summons the ghosts of Sudbury in BrokeDownTown

Mixed-media installation and performance 'phantasmagoria' take place in what was once Silverman's department store Friday and Saturday
Sep 30, 2016 9:53 AM By: Heidi Ulrichsen 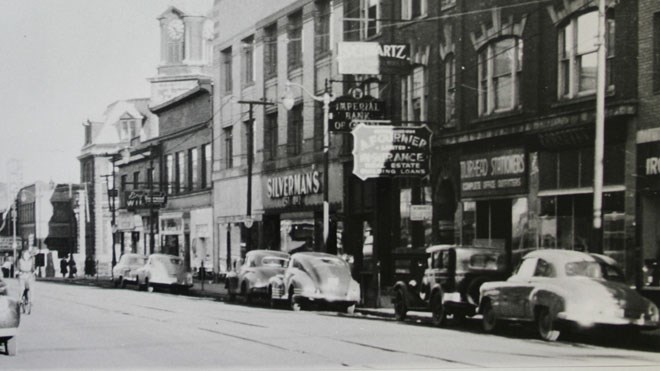 Silverman's Department Store ran in downtown Sudbury for most of the 20th century. The building now houses Querney's Office Plus. Crestfallen Theatre is using the space Friday and Saturday night to stage its BrokeDownTown project. Supplied photo.

The “ghosts” of the downtown Sudbury of yore are the focus of BrokeDownTown, a mixed-media installation and performance “phantasmagoria,” as organizers call it, being staged in a limited engagement by Crestfallen Theatre this weekend.

The happening starts at 7 p.m. at 67 Elm St., the building that used to house Silverman's Department Store (it's currently the Querney's Office Plus building). The show runs Sept. 30 and Oct. 1, though tonight's performance is now sold out.

“There's a really long history here at the site,” said Matthew Heiti, one of the event's organizers. “Going right back to 1896, there was some kind of structure. This building itself went up in 1911, and until '75, operated continuously as Silverman's Department Store, which a lot of people have memories of.”

The evening begins with an exploration of the space — part of the building is currently under renovation to become offices — and the art installations.

Then there'll be a short performance based on a fictional department store called Nickelman's.

Heiti, a local playwright, has explored Sudbury's history before, including in his play “Mucking in the Drift,” which focuses on the city's baseball past, that was produced by Sudbury Theatre Centre in 2013.

“I keep returning to this concept of home,” he said. “I'm trying to figure out what ties me to this place too, and a lot of it has to do with walking through downtown and seeing the ghosts of these old buildings laid over the current foundations.

“I kind of live with the downtown of my youth as well as the downtown that's out there now. There's always a dialogue between the past and the present that should be telling you about the choices you're making in the future.”

Tickets to BrokeDownTown are free. Reservations must be made through CrestfallenTheatre.com.