Cécile Doo-Kingué put on a stellar show May 20 as the first performer in the Vale Concert Series.
May 21, 2015 2:04 PM By: Sudbury.com Staff 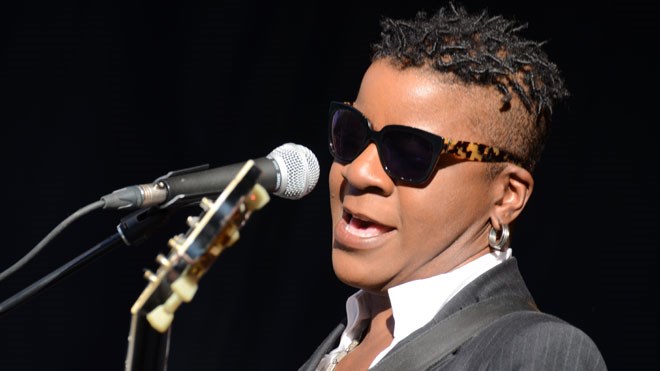 The Grace Hartman Amphitheatre once again came alive with the sound of music, as Cécile Doo-Kingué blended blues, soul and Afro-folk to create her unique sound. Photo by Marg Seregelyi.

Cécile Doo-Kingué put on a stellar show May 20 as the first performer in the Vale Concert Series.

The Grace Hartman Amphitheatre once again came alive with the sound of music, as Doo-Kingué blended blues, soul and Afro-folk to create her unique sound.

We had more than 500 people at the show, and the place was rocking," said Bob Bale. "This was a real feel good night. It was Cecile's birthday. When she broke a guitar string, the audience sang happy birthday to her and rose to give her a standing ovation. It pretty much blew her away.

"This was our best May kick off in four years. A great night all around. We've already tied last year's record for sunshine events."

During the show, Angie Robson, manager of corporate and Aboriginal affairs for Vale’s Ontario operations, announced that Vale is again kicking in $50,000 in operating costs for the Sudbury Food Bank this year.

With the first show come and gone, Union Duke will hit the stage on June 17 for the next concert in the series. All shows begin at 7 p.m. and admission is free. Monetary donations to the Sudbury Food Bank are welcomed.

“Vale is proud to continue this popular tradition of excellent music in support of a great cause,” said Robson. “We have an incredible lineup of talent this year, and we invite the community to come out and enjoy these free concerts on shores of Ramsey Lake this summer.”

Over the past three years, the Vale Concert Series has raised almost $50,000 for the Sudbury Food Bank in funds and food thanks to the generosity of the community.