A group working to locate a cinema co-op in the defunct theatre in the Rainbow Centre Mall is close to securing a tenancy agreement with mall management.
Feb 26, 2014 3:40 PM By: Heidi Ulrichsen 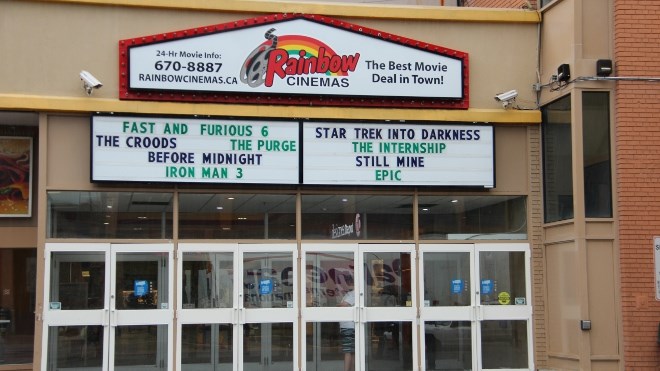 After Rainbow Cinemas closed its doors last summer, a steering group formed to see if the community could make use of the space.

But one of the group's organizers, local filmmaker Beth Mairs, said before any formal steps could be made, they had to officially incorporate as a not-for-profit co-op, something that happened earlier this month.

The Sudbury Downtown Independent Cinema Co-operative made a formal offer to mall management last week, and expects to hear from them later this week. Mairs said the group hopes to take over the space by April 1.

The plan is to use the venue's six theatres for a variety of purposes. Digital projectors will be installed in two of the theatres, and both second-run Hollywood films and art films will be screened.

Mairs said she's heard from a lot of people who miss the second-run Hollywood films as an affordable outing.

“We want to retain those customers,” she said.

The expense of digitization was one of the reasons given by the owners of the former Rainbow Cinemas for closing the theatre.

“That's the only way we can move forward, because things really have dried up in terms of the classic 35-millimetre reels that films were shown on,” Mairs said.

The co-op has also received multiple proposals for what to do with the rest of the venue, although nothing is firm at this point.

They've been approached by live theatre groups, a filmmaker hoping to use some of the space for post-production and the Radisson Hotel, which would like to use the venue as overflow space for conferences.

To pay for the project, the co-op has been applying for funding from all three levels of government, as well as reaching out to corporate sponsors, Mairs said.

Once the deal with mall management is official, they'll also be selling lifetime co-op memberships for $40 each.

“Assuming that the news is positive this week, we want to hit the ground running throughout March,” Mairs said. “We're going to have a special campaign to try to draw 1,000 charter members.”

To learn more about the cinema co-op project, search for Sudbury Indie Cinema Downtown on Facebook.