BY GIANNI UBRIACO It was a sunny day for racing Saturday at Bell Park as Lake Ramsey played host to the seventh annual Sudbury Dragon Boat Festival.&#160; The event raised about $90,000 for the Sudbury chapter of the Multiple Sclerosis Society.
0
Jul 17, 2006 9:29 PM By: Sudbury.com Staff 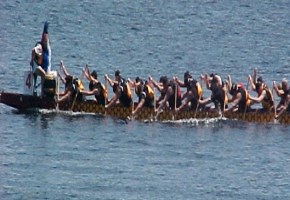 It was a sunny day for racing Saturday at Bell Park as Lake Ramsey played host to the seventh annual Sudbury Dragon Boat Festival.&#160;

The event raised about $90,000 for the Sudbury chapter of the Multiple Sclerosis Society.

The big winner from the competitive mixed division for the second year in a row was the Canadian Senior Dragonboat Club.

&quot;It always feels good to win,&quot; said team member Bruce Raymond. &quot;It means all our practices paid off and our crews came together as a team. We&#39;re paddling the way we want to paddle and we&#39;re getting the results we want.&quot;

Raymond explained that his team has been training a lot and worked very hard in the off-season to get where to where they are now.

&quot;All of the other crews were great, but I think we were just at our peak today,&quot; he said. &quot;Sudbury is a great warm up, a tune-up event for us going into the world championship trials coming up in the beginning of August. Sudbury attracts some very good teams, so the competition is very hard and that&#39;s exactly what we want.&quot;

The 49-year-old has been paddling for the past 13 years and plans on continuing that trend in the future, both for the exercise and the sheer enjoyment of it.

&quot;It keeps us in shape, it gives us a focus for our physical training and it&#39;s social as well,&quot; he said. &quot;A lot of us are life-long friends and it gives us an opportunity to stay together and do an activity a lot of us have been doing since we&#39;ve been kids.&quot;

Meanwhile, the women&#39;s team representing the Canadian Senior Dragonboat Club also managed to cross the finish line and take first place in the competitive women&#39;s division, but only by a fraction of a second.

There were also six recreational mixed division championship races held with Masters of the University coming out on top in the division six championship.

&quot;I think this is great,&quot; said 24-year-old first-year biology student Vivien Hoang. &quot;It&#39;s for a great cause and you get to meet a lot of great people and a lot of these people I know and I&#39;ve seen around school, but I&#39;ve never had a chance to talk to them. Now, we&#39;ve spent two full days together, we learned about our peers together, and we have a whole day planned out together.&quot;

The division five winners were the Swiss Chalet Shake Your Tailfeathers with the Golder Riff Raft team finishing in last, but they were still happy with their performance.

In the division four championship, the Employees of Canada Revenue Agency took first place, bringing a smile to the face of veteran paddler on the team, Alvo Santone.

&quot;It was a lot of good-hearted competition,&quot; said Andrew Gerhard, a member of the Y&#39;s Guys team which finished in last place in the division one consolation final. &quot;I think it takes advantage of the lakes we have in Sudbury. It&#39;s nice to see all the people out here enjoying the outdoors.&quot;