Experimental and educational: Getting some Perspective at Cinéfest 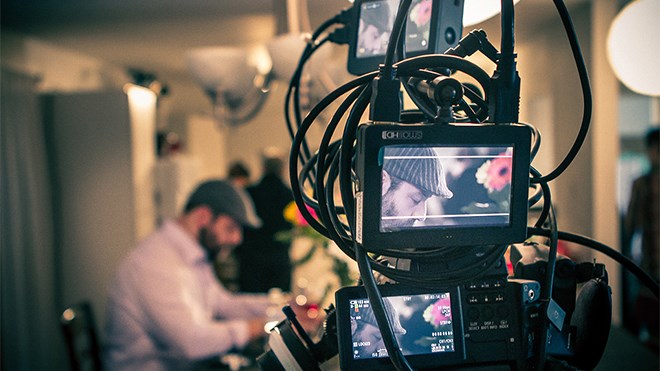 Behind the scenes at the filming of director Benjamin Paquette's “Perspective” which will screen at Cinéfest Sudbury on Sept. 25. Supplied photo.

For director Benjamin Paquette, working inside a box is nothing new. The director and Laurentian/Thorneloe University  professor has said that he is accustomed to working within a limited budget, with a limited crew and with numerous obstacles, whether self-imposed or from outside forces.

This has not stopped him from thinking outside of the confines of that box in his directorial style, challenging the boundaries of film making and experimenting, all while providing an educational experience for his students.

On Sept. 25, the fourth and newest chapter of Perspective will premiere following the re-screening of the first three chapters.

The film is subtitled “Variations on a Love Triangle in 9 Chapters” and is a nine year undertaking that is now in its fourth year. The film is being released in roughly 20 minute chapters annually and the film is played from the beginning each year with the newest chapter added on.

Upon its completion five years from now the film is expected to be approximately 90 to 120 minutes in length.

Chapter four, Reflecting, is this year's addition, and Paquette took some time to speak to NorthernLife.ca to reflect on how the film has been coming together and how it is a highlight of his syllabus as a professor.

“It's always been my goal to have my students get on to an actual movie set so that they can a chance to see what actually goes on,” said Paquette. “At first it was planned to get them out on the set of something being shot in Sudbury, but with scheduling and delays there's not really any guarantee you'll get them on in time with the school year ending in April.”

These challenges led to Paquette to find a way to get his students on a set in a way that would guarantee no hiccups. Thus the beginning of Perspective. The decision to go for a project that would span nine years was a big undertaking but one that Paquette prefers.

"I could have shot a short film every year but that’s not very attractive or inspiring for anyone involved, especially the crew, cast, and students,” he said. “I needed to come up with something that I could shoot for two days every year that would turn into a feature film."

The film has been written in its entirety and is set up to lead the audience to easily grasp that there is a distinct passing of time from chapter to chapter, without banging them over the head with a “one year later...” message appearing at the beginning of each new chapter.

Paquette says that his students have really enjoyed the experience and that it is a chance to open some eyes into the business of making movies.

“Everyone wants to be a director when they first start out, and then they get on a set and they kind of go 'oh, that's what a director does? Yea I don't think I want to be a director'” said Paquette. “Instead you'll get some students who gravitate towards lighting or camera or something different.”

Paquette often describes his work as passion projects and that he enjoys the freedom he has to experiment with different methods of film making that you wouldn't necessarily find in big studio pictures.

“For this chapter for example, I only have one character speaking at a time, it's only monologue no dialogue, there's no editing and it's 20 minutes and it's all done in three shots,” said Paquette. “If I pitched something like this to a studio there's no way I would get funding.”

Each chapter costs roughly $10,000, which excludes all costs related to producing, directing, writing, and the professional crew, comprised of Paquette's close circle of professionals with whom he has worked for many years, essentially donates its time, not to mention the input from students who jump in and take on roles on set.

While the work isn't paid, the reveal that the students get at Cinéfest Sudbury, along with valuable experience, is often times payment enough for their time and effort.

“At the end of each screening, the names of the students are all in the credits,” said Paquette. “I tell them that they're going to be working on the next chapter as part of their course and they're always pretty excited about that.”

For more on Perspective, visit the film's Wikipedia page.