BY TRISHA EVANS The fondest memories my brother and I have from when we were young was riding around with our dad in the his 1969 Dodge Fargo, his pride and joy. It was his reward for working so hard most of his life.
0
Jun 17, 2006 12:43 AM By: Sudbury.com Staff 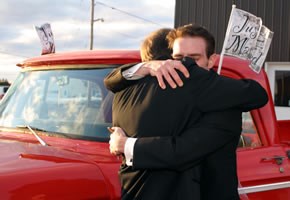 Miles Evans gives his son, Nathan, the keys to the truck and a big hug.

The fondest memories my brother and I have from when we were young was riding around with our dad in the his 1969 Dodge Fargo, his pride and joy. It was his reward for working so hard most of his life.

&#160;Dad's Fargo had a 318 under the hood, three-on-the-tree transmission, and back in the day, she was a real beauty as far as trucks went and in immaculate shape.

Everyone in our town knew my dad was coming by the candy apple red paint, the shiny chrome bumpers, and the awesome sound of the thrush exhaust roaring up and down the road.

I can still remember the "ping" sound as the heavy metal doors closed.&#160; My brother and I would argue who was going to sit beside my dad, even if we were just making the weekly trip to the dump.

We lived on the outskirts of New Liskeard, and my dad worked the night shift at the lumber mill. One day, the mill closed its doors, leaving my father without a job and any sort of warning it was coming. Like any good father, to provide for his family, my dad did something we never thought he'd ever do - he sold the Fargo.

My brother and I were devastated when we saw someone else driving the Fargo down our long driveway, which seemed so much longer that day.

Ten years passed, but my brother and I still remembered the sacrifice my dad made.&#160; My brother decided to&#160; to find the old red truck. He found it neglected and parked in the back of the owner's property. The new owners had wanted to turn it into a&#160; mud bogging machine, but it hadn't been a priority for them.

My brother was disappointed in the state of the Fargo. It had rust spots all over the body and the interior was in just as bad shape. He bought the truck and planned&#160; to fix it up and give it back to my dad as a "thank you" present for putting our needs ahead of his own.

My dad was overwhelmed by the gesture, but insisted that my brother keep the truck as his own special project.

Keeping the Fargo in the family was reward enough for him.

Like all good intentions, the truck sat idle for seven years waiting for my brother to "fix her up." Like most people in their 20s, my brother didn't have a lot of money, and after he popped the question to his girlfriend, he was saving up for things like rings, a church, the hall. The truck slipped down his list of priorities.

My dad came up with a plan to restore the Fargo as a wedding gift for my brother.

It was a tough process. Trying to locate parts was one thing, but getting it accomplished in time was another. It was a literally a labour of love! One of the hardest tasks was keeping something like that a secret, especially in a small town.

The transformation was remarkable. My dad kept me posted on the Fargo's progress.

We decided to wait to unveil the truck after the ceremony. When everyone arrived to the hall, after the nuptials and photos, I assembled them outside for the big surprise.

I told my brother to hold onto his new bride's hand, and with their eyes closed tightly I led them outside into position

where everyone was waiting with their cameras poised.

Trying to hide the tears and shakiness in my voice since I too hadn't seen the truck all finished, I said the magic words... "Open your eyes!"

Between the flashes of what seemed like a million cameras, my brother gasped and almost fell to his knees. Tears were streaming down our faces with mixed emotions of joy, pride, sacrifice, and the overwhelming sense of family overtook us all.

My dad, the quiet type who never really says much, walked over to my brother and gave him the keys. My brother gave my dad the biggest hug anyone there has ever seen. There wasn't a dry eye in the crowd.

After the tears stopped and we got our emotions in check, my brother, still red-faced and overwhelmed, put the keys in the ignition and fired up the engine. The familiar sounds and memories flooded back every time my brother revved it up pressing on the gas pedal.&#160;

Our friends, Reg and Alley, played a large role working tirelessly on the body and paint, while dad worked on the mechanical.

He managed to pull it off the way he always does. My father always put others first and finds joy in helping others.

He's always worked harder than anyone I've know to provide for us.

Now the old Fargo is back in the family, perhaps generating more fond memories for my brother's children.

For me, the Fargo will always be a constant reminder that there's more to life than material things and that family is the most important gift of all.

Trisha Evans works as a graphic artist at Northern Life.