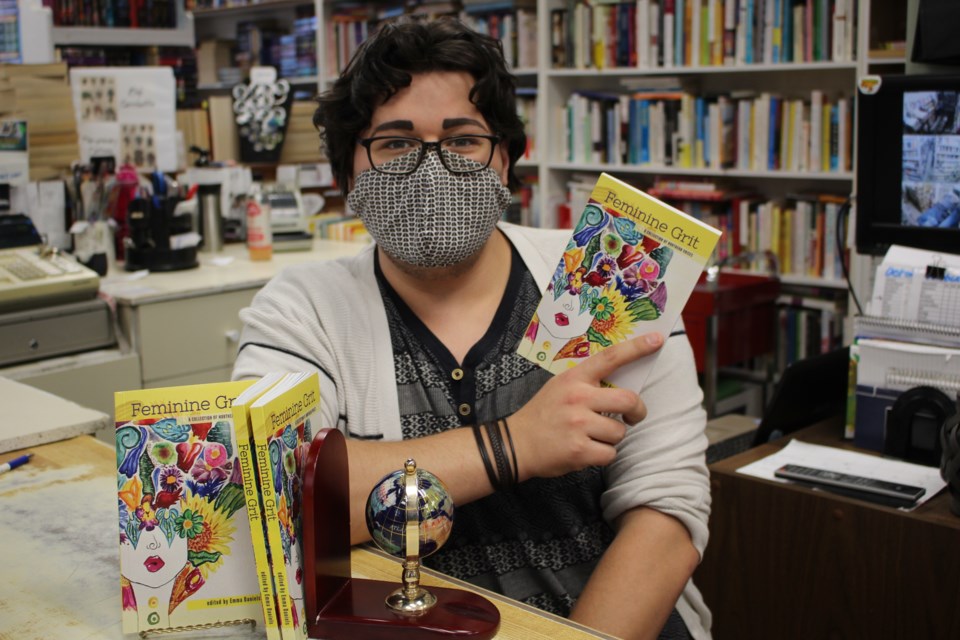 Cory Gaudette with “Feminine Grit,” a self-published anthology of poetry by local writers. The anthology is published under the name “Emma Daniels,” his drag persona. (Heidi Ulrichsen/Sudbury.com)

Cory Gaudette always loved writing as a kid, but as a young adult, poetry in particular came to play an important part in his life after going through a (very) rough patch.

“I started experimenting with drugs, and as a teenager, it got out of hand really quickly,” Gaudette said.

“I ended up robbing a store when I was in my late teens. I was tried as an adult. I went to jail, and that’s where I sobered up. I was sentenced to 15 months.

“During this healing process, when I started sobering up, that’s where I turned to poetry again because it’s very limited on what you can be doing. You’re supposed to be focusing on yourself.

“I decided to pick up journaling while I was in there, and it kind of just turned out to be poetry. It was a very healing experience for me to go back to writing and to really explore all that. I think writing is probably still one of the reasons I’m still sober today.”

Gaudette is a part of the LGBTQ community, and a drag queen with the persona “Emma Daniels.”

The writer has just put out a self-published anthology of poetry by “Emma” and more than two dozen other local writers, most of whom he got to know from Wordstock Sudbury poetry slam events. (We’ve included a poem by Emma below for your enjoyment).

The book is called “Feminine Grit,” and explores the feminine voice and femininity in general under the themes of empathy, humility and vulnerability. Not all of the writers featured in the book are women — there are male writers as well.

“I grew up in Chelmsford, a very small town, and when I was growing up, there wasn’t a lot of openly gay people,” Gaudette said.

“A lot of the time I was bullied, not only for being gay, but for being very feminine and flamboyant, and a lot of people see my feminine qualities as a weakness.

“But growing up and (studying gender studies at Laurentian University) and all that kind of stuff, I met a lot of feminine people who are very strong and empowering.

“The anthology came about, gathering feminine voices, and showing that we are actually strong people who just by chance show our vulnerabilities.”

The writer chose the name “Feminine Grit” for the anthology because when he thinks of grit, he thinks of perseverance and gritting your teeth and getting things done as a feminine quality.

“Instead of hiding our feminine qualities, we take them, and we keep showing them to the world,” Gaudette said. “We don’t let people take that away from us.”

The anthology was funded in part by a GoFundMe campaign that raised $900, which was generously matched by Gaudette’s employers, Bay Used Books. “They definitely made this project possible,” Gaudette said.

The project is supporting YWCA Sudbury’s Genevra House by donating $1 from the first 1,000 book sales to the organization.

“I found it really went well with the overall theme of the anthology, because a lot of women who are using those services are often either abused or put in these positions because they’re seen as weak,” Gaudette said.

“And they’re not. They’re very strong individuals. Especially to reach out and say I need help is not something a weak person would do.

“I find even when you’re just reading these poems, a lot of the time you can see that. Some of the contributors have felt almost in the same position in these people. They’ve felt either scared or oppressed in some kind of way.

“I just thought that the two of them went really well together, the themes of femininity and what the shelter does.”

The collection is available on Amazon.ca and at Bay Used Books on 124 Elm Street, Sudbury, or by finding them on Facebook

Why do I have the right to call this body my own
When I continue to disown the man in the mirror
Standing parallel to me, in everybody's reality
But never my future.
The space inbetween is unbearable to me
And I’d like to know the answers.
When will she stand in front of me
And won't ripple and waver like water.
The image I see, the person I am
Can’t be portrayed in a single picture
Yet I am judged by the way I look
And not for the dreams for which I aspired
The actions we make of love and of hate
Get hung up on the wire
It's where I learned to hate my body
These words cut me deep and light me on fire
They fill my hatred of you and of me
I wish it wasn't like this...that it could be we
The person I am and the person in the mirror
In harmony, in union, together

Before and after: Railroad museum’s Little Red Caboose gets big restoration
Nov 24, 2020 2:00 PM

Get your tickets: Limited capacity Symphony Snowfall Gala fundraiser set for Dec. 12
Nov 23, 2020 9:00 PM
Comments
We welcome your feedback and encourage you to share your thoughts. We ask that you be respectful of others and their points of view, refrain from personal attacks and stay on topic. To learn about our commenting policies and how we moderate, please read our Community Guidelines.