It was “just like Christmas morning” for Art Gallery of Sudbury director Karen Tait-Peacock June 19, when seven paintings donated to the gallery by the family of Group of Seven member Franklin Carmichael were unveiled.
Jun 23, 2014 2:45 PM By: Heidi Ulrichsen 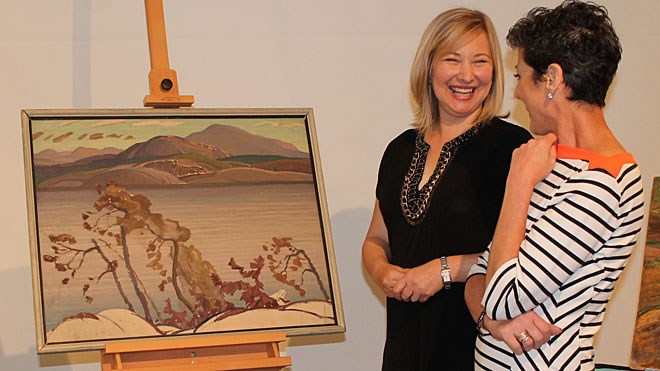 Josée Forest-Niesing and Karen Tait-Peacock admire one of the donated Franklin Carmichael paintings at the Art Gallery of Sudbury. Supplied photo.
It was “just like Christmas morning” for Art Gallery of Sudbury director Karen Tait-Peacock June 19, when seven paintings donated to the gallery by the family of Group of Seven member Franklin Carmichael were unveiled.

“We had a collective gasp,” she said.

The paintings include five of Carmichael's works, one painting by fellow Group of Seven member Arthur Lismer and a portrait of Franklin Carmichael by his contemporary artist, Fred S. Haines.

The art will be displayed at the Art Gallery of Sudbury from July 1 to Sept. 7 as part of the gallery's second annual Festival of the Seven, celebrating the famous 20th century Canadian plein air artists' work.

Tait-Peacock said the gallery has had a relationship with the Carmichael family for some time, and has committed to name its new downtown gallery — which it plans to build by 2017 — after the painter.

It's important to celebrate the work of The Group of Seven, a group of Canadian landscape painters who banded together from 1920 to 1933, said deputy gallery director Tom Smart.

“It was kind of a magical moment in our history where this young generation came back from the war and really helped to define who we are as a people,” he said.

They did that through their interpretations of the landscape, particularly the landscape in this part of the province, including Killarney, La Cloche and Algoma, Smart said.

Also as part of this year's Festival of the Seven, the work of seven painters from the Georgian Bay area is being displayed at the gallery.

“We want to show how beautiful the landscape is ... and understand the land is still an artistic muse, and the artists are creating great and diverse responses to the land with very different intents,” said Smart.

An opening reception for this year's Festival of the Seven exhibit, “A Visual Voyage: Navigating Georgian Bay,” will take place July 3 from 5-7 p.m.

A number of other events associated with the festival, including excursions to Grace Lake for painters, sketchers and photographers, will also take place this summer.

For a full listing of these events, visit www.artsudbury.org.