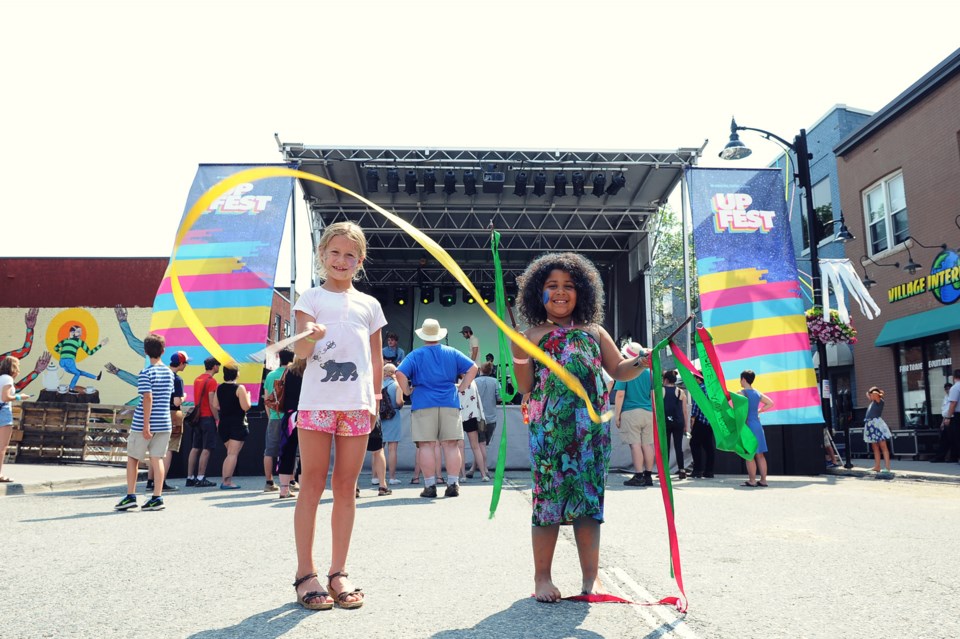 If you’ve been to Up Here before, then you probably know to expect the unexpected. If you haven’t, get ready for a seriously surprising weekend Aug. 17 -19. (File)

If you’ve been to Up Here before, then you probably know to expect the unexpected. If you haven’t, get ready for a seriously surprising weekend Aug. 17 -19.

The organizers of Sudbury’s downtown urban art and music festival, now in its fourth year, describe it as a laboratory festival.

“Every year we’ve tried to do something different, we give ourselves a challenge that we’ll never get too comfy,” explained co-founder Jen McKerral.

They certainly have something different cooking for Sunday afternoon. After the success of last year’s Sunday afternoon finale (a 3D Dear Criminals show at Theatre Cambrian) they’ve extended their programming into Sunday again, but with a totally new direction (literally).

“We thought, ‘It’ll be really hard to beat it so we’ll change it,’ ” said McKerral.

They’re tight-lipped about exact details, but it’s safe to say you should be at their 30-foot geodesic dome (back from year two) on Durham by 12:30 p.m. Sunday.

Your feet may have been made for walking, but that’s not what they’ll do; there might be something rolling up to take you away for a magical mystery tour though, so be sure to get there early if you want to get in the queue for the “too much, magic — .”

This year they also have their first dedicated rap and hip-hop show on Friday night featuring Montreal’s Donzelle and Toronto’s The Sorority at Durham Hall. Expect 10 women doing hip-hop — “who are just sick!” according to McKerral.

Christian Pelletier, one of the festival’s other co-founders, also pointed to shows by Patrick Watson (on Up Here’s wishlist since day one), Efrim Manuel Menuck, and Daniel Lanois and Venetian Snares as especially weird and wonderful ones to check out.

“For me, personally, the sum of weird this year is the [Daniel Lanois and Venetian Snares] set,” said Pelletier. “He’s one of the world’s biggest performers and now he’s just having fun playing music with his bud.”

Some tried-and-true elements of the festival will stay the same, though, and this includes free events like RBC’s northern series, the pop-up concerts, and the family day.

The northern series takes place in restaurants across downtown between 5 and 7 p.m., so you can take a break from standing and walking to sit down and grab a bite to eat while enjoying the free music.

The pop-up concerts are free too (if you can find them), fortunately so is the app that lets you know when they’re happening, so make sure to download it before the festival and enable notifications if you want in on the fun.

Finally, the family day will take place from 11 a.m. till 4 p.m. between Memorial Park and the section of Durham they shut down for the festival — yes, the bar is back too — but it’s even bigger and better than ever before thanks to some help from the Greater Sudbury Public Library.

The fun includes but is not limited to: mini-geodesic dome construction, murals on those domes, button making, splash-pad storytelling, Science North robots, and third-eye painting (“It’s so creepy, I love it,” said McKerral).

Too many kids at Family Day for you? Check out Brigitte Bardon’t’s Drone Therapy on Saturday at 1 p.m. The Toronto-based musician fuses talk therapy and live drone music in what’s been called “DIY Dr. Phil,” and McKerral describes it as, “weird — and important — as f---.”

Her Saturday afternoon performance is at NISA/Northern Initiative for Social Action, and there will be another session at 6 p.m. if you sleep in past the first (Friday night is bound to be a late one, but do try and pace yourself!)

Between the shows, (free!) mural tours, and art installations, there really is something for everyone. You can pick up tickets for individual shows (or volunteer in exchange for tickets to some), or invest in a passport if you want to have more flexibility and see it all.

“It’s really neat with the passport because people can just pop into shows. Last year we saw people biking around, leaving their bike outside, and stopping in for a bit,” explained Pelletier.

“Well, that was just you,” quipped McKerral.

They laughed, but Pelletier has a point, biking is certainly an easy way to get around and make sure you see the (almost literally) countless things Up Here will have to offer. Just don’t forget your helmet, who knows, maybe you can give it a third eye.

For more information visit www.uphere.com or download their app.

Ella Jane Myers is a freelance writer in Greater Sudbury. She's fueled by good grub, old sci-fi and long walks with the dog. Visit her at EllaJaneMyers.com.