Looking for some entertainment this holiday season? Look no further than Verve, which is hosting two upcoming shows.
Nov 26, 2014 2:35 PM By: Sudbury.com Staff 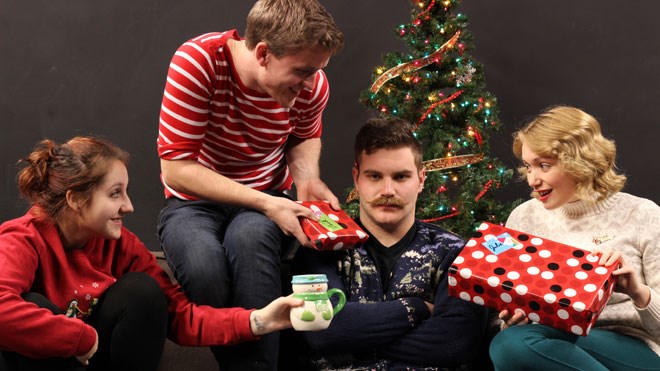 Verve presents the family friendly show “Snowed In: A Verve Christmas Special” from Dec. 11 to 14. From left are actors Natalie Callewaert, Matkai Burmaster-Hansen, Marcus Dias and Abigail Yzereef. Supplied photo.
Looking for some entertainment this holiday season? Look no further than Verve, which is hosting two upcoming shows.

Verve, which offers arts education for youth in a 60-seat theatre, opened its Elm Street headquarters across the street from the courthouse in September.

One of its upcoming performances, the Nov. 29 improv show “Off the Top of Our Heads,” features eight local actors.

One of the performers, Abigail Yzereef, said the show will be similar to the hit television show “Who's Line is it Anyway?”.

“You don't know what's going to happen,” she said. “It's different every time.”

While the improv show is only appropriate for those over the age of 18, the folks at Verve haven't left out families.

From Dec. 11 to 14, the theatre will stage a family friendly Christmas musical, “Snowed In: A Verve Christmas Special.”

“It's actually about students that get snowed in and they want to go home for Christmas,” said Yzereef, a Verve staffer who penned the play.

“But then there's the whole boy-meets-girl plot. It's really, really cheesy on purpose. That's what's funny about it. That's what children can enjoy and adults can enjoy.

“It's acknowledging yes, we know what's going to happen in the end, it's going to be a happy ending, and we all know what it is. But let's just all enjoy getting there.”

Tickets to the Christmas are $8 for children under the age of 16, $12 for students and seniors and $15 for adults.