Local Francophone actor said she had an ‘existential crisis’ after pandemic hit, but realized she needed to get creative and use her skills to help others
Aug 25, 2020 1:00 PM By: Heidi Ulrichsen 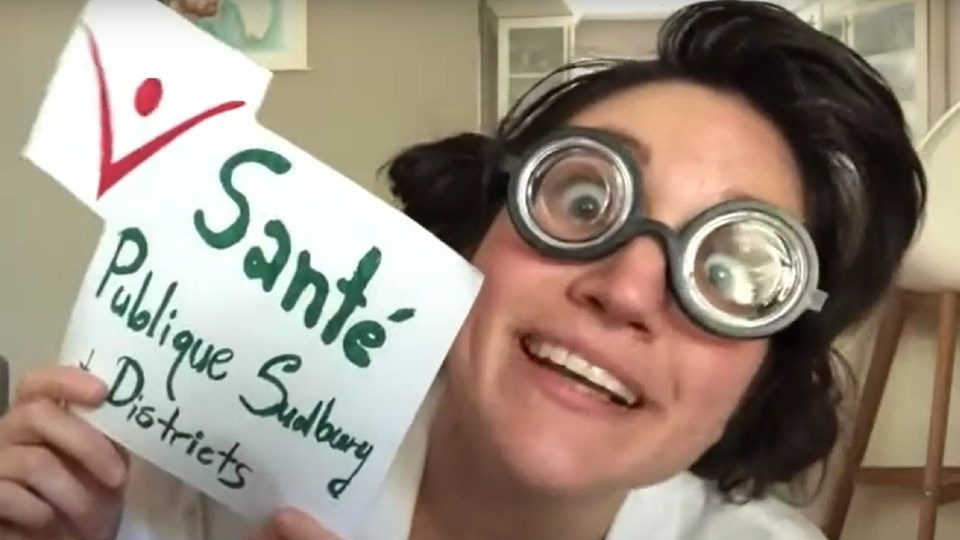 Sudbury-based Francophone actor and writer France Huot said she experienced an “existential crisis” for a few months after the pandemic hit and live performances became impossible.

She kept her job as audience development officer with Théâtre du Nouvel-Ontario, but with TNO cancelling the balance of its 2019-2020 season due to COVID-19, it became clear theatre actors like her were going to have to show some creativity.

She explains she’d already developed the character to explain aspects of theatre productions for kids attending TNO’s matinees this past season.

Clad in a white lab coat, pop bottle glasses and messy hair, Gretchen now spreads public health messages about the pandemic such as physical distancing and the transmission of COVID-19. You can check out a couple of her videos below.

“It’s been tough,” Huot said. “We’ve just been asking ourselves ‘What do we do? How do we help?’

“This little collaboration with public health is our way to kind of contribute, keeping reinforcing those messages of let’s all be safe, and let’s keep practising social distancing and washing our hands, and putting on masks, but with a bit of humour.

“We’re still a theatre company, but to us it seems like a direction we could go.”

Huot, who films the videos in her own living room, said she consults with the health unit about the public health messages they want to get out there.

So far, she’s had a good response to the videos.

The actor plans to reach out to local school board to see if they’re interested in partnering on the Gretchen COVID-19 videos.

While a good percentage of Greater Sudbury’s population is bilingual, Huot also plans to eventually put English subtitles on the videos as well, so they’re accessible to more people.

“I’ve gotten a lot of responses from people writing to me saying ‘Wow, that really made me laugh,’” Huot said. “I thought ‘Well, that's great.’ That’s part of it too, is being able to make people laugh.”

As for TNO’s 2020-2021 season, Huot said that’s obviously not going ahead as planned, but there are some projects in the works, so watch out for upcoming announcements.

She said she wouldn't say that artists are reinventing themselves during the pandemic, but rather "we’re just trying to find ways to adapt and still trying to do what we do. We still have to keep doing what we’re doing somehow, and do it in a creative way.

“Also we find ways that uplift people’s spirits during this time. I think that might be part of our role.”

Pandemic meant songwriting, new album for Sudbury’s Ashley Woodruff
Oct 19, 2020 8:00 PM
Comments
We welcome your feedback and encourage you to share your thoughts. We ask that you be respectful of others and their points of view, refrain from personal attacks and stay on topic. To learn about our commenting policies and how we moderate, please read our Community Guidelines.