Marking a centennial anniversary is a time for reflection, said the commanding officer of the 2nd Battalion Canadian Irish Regiment. Lt.
Oct 1, 2015 1:40 PM By: Arron Pickard 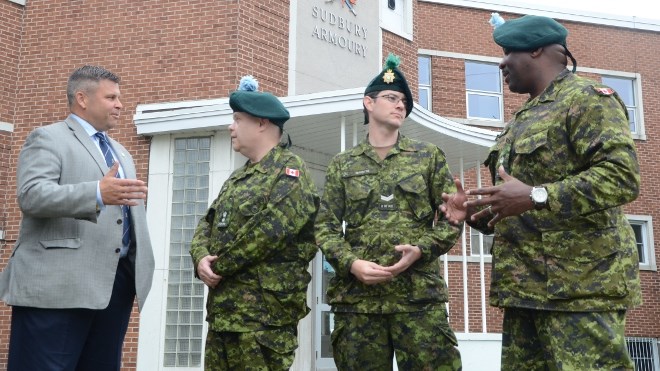 Lt.-Col Kenrick Sproul, who has led the Sudbury-based reserve army since March 1, 2011, said the Irish Regiment of Canada has served this country with the lives of many of its soldiers. He said reflecting back on the history of the 2nd Battalion, he realizes it is a regiment that has stood the test of time.

“While it may be one of the smaller regiments, and stationed in one of the smaller communities within the Canadian Forces history, it has solidified itself as a unit that is willing to step up, to step out, and to step in front of those situations to represent our country, and our community here in Sudbury,” said Sproul.

The Second Battalion, The Irish Regiment of Canada (2 IRRC) is Canada’s only remaining Irish unit. The battalion is established as a company with battalion headquarters reflecting a recruiting strength of roughly 120 soldiers. The headquarters is located in the Sudbury Armoury at 333 Riverside Dr. The unit tartan is the Saffron pattern and the motto is “Fior Go Bas”, Gaelic for Faithful Until Death.

The unit's history traces back to the founding of The Irish Regiment of Canada on Oct. 15, 1915, as part of the First World War's mobilization. The regiment's soldiers were reorganized into several different units (as was common for the Canadian Expeditionary Force). Though the unit did not enter battle as a formed entity, the valour and sacrifice of the individual soldiers (60 per cent of the original draft were killed or wounded) allows the Irish Regiment to retain 11 battle honours from the First World War.

During the Second World War, the unit fought through the Italian Peninsula in 1943 and 1944. During the Battle of Coriano, Lt.-Col. I.H. Good, of the 1st London Irish Rifles, presented the blue hackle from his caubeen – an Irish beret – to Lt.-Col. Clark of the Irish Regiment of Canada. Coriano was a hard-won victory and the unit non-commissioned officers and officers still wear the blue hackle to this day.

From Italy, the unit moved to Holland in 1945 where, after the liberation of the village of Otterloo, elders of the town presented the unit with a bible in thanks. This bible is currently in the Combined Mess in Sudbury protected by a glass protective case.

The 2nd Battalion Irish Regiment of Canada was raised in 1965 from the amalgamation of previous Reserve Force units, but also carries on the tradition of the Sudbury Rifle Company raised in August, 1896, known for a time as Sudbury’s Own.

2 IRRC continues to serve the citizens of Canada and Sudbury in international operations and at home. Members of the unit have served in Bosnia, Afghanistan and other locations overseas and have proudly represented Northern Ontario in domestic operations such as the Ice Storm.

The 2nd Battalion's day-to-day operations are very clerical, Sproul said. The staff's job is to ensure soldiers' paperwork are in order, to ensure soldiers are scheduled for various career courses or tasks they may be called out on. It is also making sure equipment and vehicles are maintained and serviced in a timely manner, so that when it's time to roll out on an exercise, or when the Regiment is loaning out that equipment, it is good and ready to go.

Duties also include tracking upcoming operational events, both domestic and international, and to co-ordinate resources so they are where they need to be when they need to be there, Sproul said.

“There's a lot of work that goes on behind the scenes, working with our entire military infrastructure, to make sure everything is in place so that, when we show up, we just need to focus on the task at hand,” Sproul said.

In terms of numbers, Sproul said the 2nd Battalion is in a rebuilding phase right now.

Right now, 2nd Battalion is down to about 80 soldiers, Sproul said. “We really did a review of who we have, and what the requirements were to be able to produce what we believe our brigade needs from this unit, and for some members, it was just going to be too much for them.”

Of the 80 soldiers, just over 10 per cent are female. Soldiers range in age from 17 year old to within their 50s, with a full spectrum of backgrounds.

“Most members either work or go to school within Greater Sudbury – miners, police, teachers and students,” Sproul said.

As it stands, 2nd Battalion is able to effectively field one platoon, which is about 30 to 33 soldiers, Sproul said.

“We have more than that, but when I'm ready to deploy, I need to know that 30 to 33 will be available. We're now looking to stand up our second platoon.”

The future, he said, looks bright for the 2nd Battalion.

“Coming from Toronto, one of the things I marveled at was the presence this unit is afforded in the community, and the support this unit has in this community. I walk away feeling honoured and blessed to be a part of this centennial celebration. When I first came here, I said, 'I'm good to finish my career here,' because I always figured when I was done here, I would hang up the combats, but I also get a chance to be a part of this unit's centennial celebration, and I consider that an honour.”

In celebration of 100 years for the Irish Regiment of Canada, there are a number of events lined up. A meet and greet takes place Oct. 2 from 6-10 p.m. at the Sudbury Armoury, 333 Riverside Dr.

The Irish Regimental Ball takes place Oct. 3 at the United Steelworkers Hall, 66 Brady St., Tickets are still available at $90 each. For information, visit irishregiment.ca. Keynote speaker will be Gen. Rick Hillier, former Chief of Defence Staff of the Canadian Forces.

On Oct. 3, a change of command for the Irish Regiment of Canada will take place at Tom Davies Square. Sproul said it's a testament to the 2nd Battalion's contributions that the ceremony is taking place in Sudbury.

“I really want this centennial to be an opportunity for Greater Sudbury to be as proud of this unit as this unit is proud to be a part of this city,” Sproul said. “We've received great support from our own brigade, in that this weekend, there will be a change of command performed here, in the north, to coincide with the Irish's 100th celebration, and to remind us that this unit is part of the 33rd Canadian Brigade Group. We're in a great place, and I'm hoping it's going to be a great weekend, and that we get a chance to pay respect to our city, our brigade and our past and present members.”

McCormick, who is also president and vice-chancellor of Huntington University, said as an employer, he views reservists with the utmost respect.

“I'm an employer, and when I hire someone who has experience, they're coming to me with a whole lot of training already done,” he said. “It's cost effective and organizationally very sound to hire soldiers with the training they've received.”

It's the transferability of skills gained as a reservist that makes soldiers such an appealing candidate, he said.

“When you look at the history of the unity in our community, many of the men and women who have served, and who serve now, are also very active in the community in leadership roles,” he said. “Those skills you learn as a solider are very transferable to their daily lives and employment, and that's something we're very attentive in trying to make sure people understand and appreciate.”

As for the 100th anniversary celebration of the Irish Regiment of Canada, McCormick said it's an opportunity to honour the families who support the men and women of the Battalion.

“As a parent, what you choose to do has an impact on your family, and I think the 100th anniversary is also about honouring and respecting the contributions that the families make,” he said. “It's also an opportunity to honour and respect those soldiers who can't be with us, because they made the ultimate sacrifice for our freedoms.”

“It's an opportunity for education, because it's enlightening when an older solider talks to a younger soldier. Their challenges may appear different, but the experiences are similar, and it really speaks to what we call our regimental family.”

McCormick said he feels blessed to have a role within the Battalion. “I've been blessed with many opportunities in my life to do community service, and I have to say I get no greater pleasure than being part of the regimental family and seeing the work done by the women and men who are serving.”