A unique and ambitious lineup hits the main stage at Sudbury Theatre Centre
0
May 7, 2019 6:00 PM By: Matt Durnan 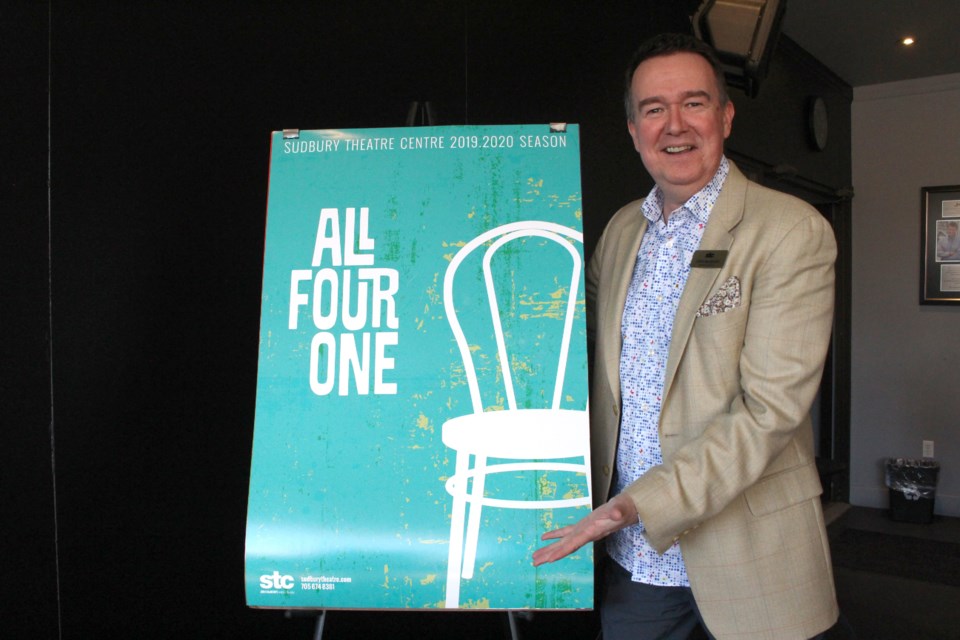 Sudbury Theatre Centre artistic director John McHenry gave an inside look at the 2019-20 STC season on May 7. (Matt Durnan/Sudbury.com)

Sudbury Theatre Centre is entering its 48th season this year and will be bringing four main stage performances to audiences in 2019-2020.

The theatre held their official season launch on May 7, announcing their season theme, "all four one". Sudbury Theatre Centre artistic director John McHenry says that the theatre saw great response with the four show lineup in 2018-19 and will carry that forward as they move toward their 50th anniversary.

"We have to look at what we can do with our small staff and our shrinking finances," said McHenry. "We're not funded like we used to be, but we had such great success this year with people enjoying our four shows and becoming subscribers, so we really wanted to keep doing four shows."

The slogan "all four one" is also a bit of a double entendre, as all four performances on the STC main stage will be a one actor shows.

"We started out thinking maybe one or two would be in this format, but it just kind of skyrocketed and we thought why not do a season of all four?" said McHenry.

The four main stage shows for this season are as follows:

McHenry will be directing A Christmas Carol, while actor Matthew Heiti will be taking on the tall task of playing every role in the performance.

"It's different than working with an ensemble cast," said McHenry. "Ninety per cent of the time it's Matthew and I working together."

Heiti admits the prospect of a one-person performance is terrifying, but exciting at the same time. The actor is more than familiar with the source material, but says that it adds some pressure when it comes to pulling off the performance itself.

"I watch A Christmas Carol every year, it's a favourite of mine, I love the Alastair Sim one, so I'm kind of just hoping I don't ruin it for myself," said Heiti with a laugh.

"John (McHenry) kindly offered this opportunity to me; I'd say I prefer working with ensemble casts because you can work off the energy of the other actors, but there's a lot of beauty in a one person performance, there's no one else to pick you up so I think it definitely displays our flaws and inconsistencies that we have as humans."

Heiti threw a shout out to Canadian actor Rod Beattie, who he says is the gold standard of the solo-actor show, and admires his ability to create an ensemble by himself.

"He transforms into dozens of characters and I've seen three or four of his shows and I think of them as ensemble casts because he is so good at embodying multiple characters," said Heiti. "I could never hope to be at that level but I think it's inspirational. There's something really interesting about watching an actor transform on stage and it pushes the audience's imagination a little bit farther."

In addition to the four main stage performances, STC will present The Nutcracker from Nov. 14 - 16, and will be bringing back Pink Floyd tribute, Affordably Numb, who will present Pink Floyd's "The Wall" from Jan. 22 - 25.

"Everyone loved the first Pink Floyd tribute we did here in January," said McHenry. "That's what putting together our season is about, it's about our patrons and giving them what they want to see. It's not about us or what I want, because what good is it if I pick a bunch of shows I want to see but no one's going to come?"

Theatre for young audiences returns once more this year, with "Abigail B. Seven-Year-Old Superhero", written and directed by Judi Straughan.

There's much more on tap for the 2019-20 season and you can find the full schedule at sudburytheatre.com/19-20season/.

Present subscribers can renew their subscriptions for the upcoming season until June 28, after which subscriptions will go on sale to the general public.