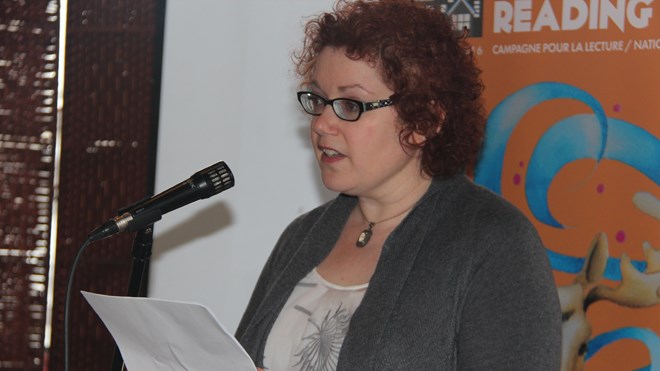 She's the fourth person to fill the role — following in the footsteps of Roger Nash, Daniel Aubin and Tom Leduc — and the first woman.

“It's been surreal,” said Fahner, speaking at the March 21 launch of Reading Town Sudbury 2016, where the announcement was made.

“I've known since the last part of February, so I couldn't tell anyone. It didn't seem real. It's real now.”

Fahner, who will serve a two-year term as poet laureate, is currently taking a sabbatical from her teacher job to pour all of her efforts into her literary efforts.

She said she's close to finishing both her fourth book of poetry and her first novel, and is also working on two plays through Sudbury Theatre Centre's Playwrights' Junction program.

Next week, Fahner heads to The Banff Centre in Alberta to work on her novel with Canadian author Lawrence Hill.

As a teacher, Fahner said she hopes to work with young people and other teachers to help youth discover the joy of poetry and self-expression.

“I just love to see a student who writes blossom,” she said. “That's part of the joy of me being a teacher.”

She also has a few other projects in mind, including working with the Art Gallery of Sudbury and the Northern Initiative for Social Action (NISA), a local agency run by and for consumers of mental health services.

“I've battled with depression and anxiety,” Fahner said. “I know poetry can lift people out of despair.”

She said she'd also like to expand on Leduc's initiative that saw snippets of local poetry displayed in transit buses — she wants to do the same thing at the Greater Sudbury Airport.

Spring must be in the air: Seedy Sunday is this weekend!
0