The Val Caron-born boys of Life Size Dream have come a ways from their early days as High Definition.
Jul 28, 2010 5:47 PM By: Jenny Jelen 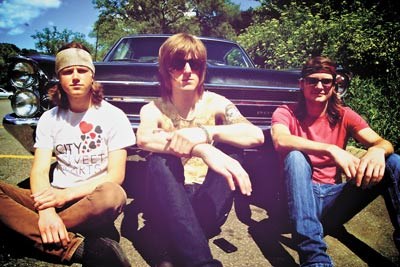 (From left) James Yorke, Tom Yorke and Gilles Beaulieu of Life Size Dream will be making a tour stop in their hometown at the Townehouse Tavern on July 29. Supplied photo.

The Val Caron-born boys of Life Size Dream have come a ways from their early days as High Definition.

Gilles Beaulieu, the band’s 22-year-old bass player, said the more classical sound of their current music was formed through “the process of growing up.”

High Definition was made up of 11-year-old James Yorke on drums, 13-year-old Tom Yorke on guitar and 15-year-old Beaulieu on bass.

Moving away from their punk-rock origins, Life Size Dream came about in January of 2009. “We went through this whole metamorphosis,” Tom said. “We’re trying to define what we do now, opposed to what we did before.”

Although the boys still have fond memories of High Definition, they said there is no reunion in sight. “We’re proud of it, but it’s something in the past,” James said. “It was more naïve, and there wasn’t as much thought put into it as our music today.”

Beaulieu said the band’s shift in sound has sparked mixed reviews. “We’ve spoken to a lot of people who really liked High Def, and wish that we would still play the songs,” he said. “We’ve also met a lot of people who love the transformation, and think that we’re on the right track. There’s a lot of positive feedback on both ends.”

Now, with the new sound in tow, Life Size Dream is touring its most recent four-track demo. The tour includes 12 stops over 14 days, many of which are on the east coast.

During a phone call from an apartment above a Moncton, N.B. bar, Tom said the band’s first tour was going better than expected.

“You’re relying on a lot of things: promoters, if the shows still going to be going on, and a van — a big piece of machinery that could break down at any time — you’re relying on a lot of things that could potentially fail,” he said. “If you expect some things to go wrong, no matter what, you’ll take it in the right way and you won’t be aggravated.”

The band’s tour wraps up in Toronto, where all three boys currently live, but not before a stop in Sudbury at the Townehouse Tavern on July 29.

Beaulieu said playing to a hometown audience is always a good experience.

“The last time we played the Townehouse, there must have been 150 people there, mostly friends who just haven’t seen us in a while,” he said. “We’re really looking forward to the Sudbury show. I’m expecting all the same people to come out again.

“Of course, we just love going home. It’s always a good time going back to Sudbury.”

The boys said their future plans involve lots of writing and rehearsing, and there are talks of an Ontario tour in the fall.
For more information or to hear Life Size Dream, visit www.myspace.com/lifesizedream