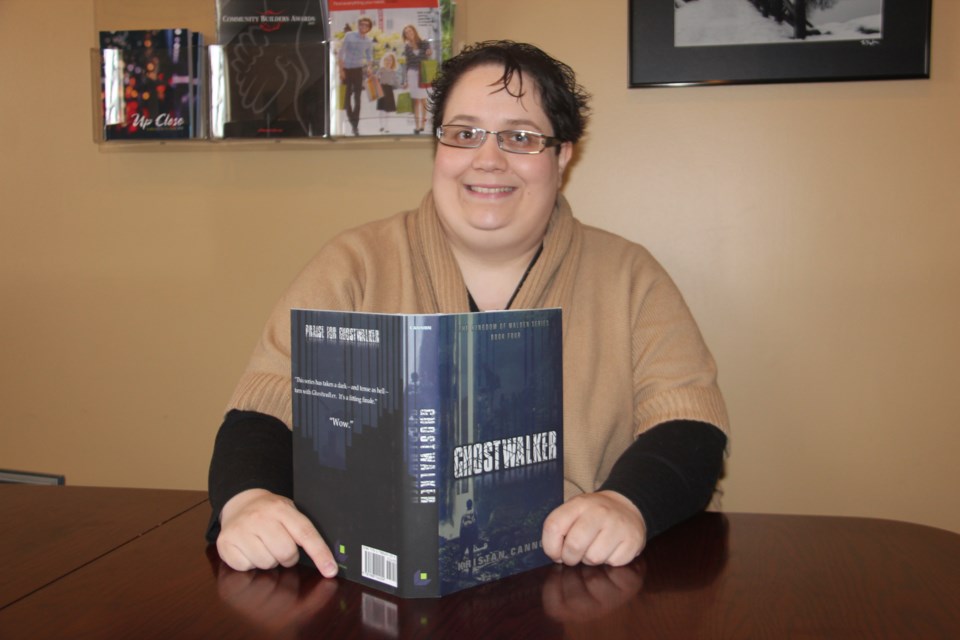 Kristan Cannon has just published “Ghostwalker,” the fourth in her Kingdom of Walden Series, about a post-apocalyptic Sudbury. (Heidi Ulrichsen/Sudbury.com)

Imagine a post-apocalyptic world where there's no more oil and the world's economy has collapsed. Now imagine what residents of Greater Sudbury would do in that situation.

That's exactly what local author Kristan Cannon's "Kingdom of Walden" series is all about.

It focuses on the residents of the small community of Whitefish, who decide to make a go of it there rather than scavenging because they have access to fresh water from the Vermillion River and power from a solar farm.

Cannon has now published four books in the series since 2014 — “After Oil,” “The Last Iron Horse,” “Between Silence and Fire” and her latest book, “Ghostwalker,” which just came out last month.

In “Ghostwalker,” the main character, Derek Moss, is alone and far behind enemy lines in his own old backyard in Garson.

He finds himself cut off from the Rangers of Walden — a group he founded on the other side of the city — who have presumed he is dead.

Cannon said it always irritates her that very few of the movies and TV series filmed in the city in recent years are actually set in Sudbury. That's why she decided to write about the city in which she lives.

“Should it ever become a bestseller, people can say 'Hey, it was written about Sudbury,'” Cannon said. “'There is no standing in. When she says city hall, she means Tom Davies Square.'”

While her dream of becoming a best-selling author hasn't as yet come true, Cannon has received some critical acclaim for the series.

“After Oil” came in third out of 120 other books in last year's Summer Indie Book Awards, and “The Last Iron Horse” and “Between Silence and Fire” have both landed on the eligible list for a Prix Aurora.

Cannon's books are published by KCE Publishing, an indie fiction publishing company run as a non-profit by a collective of authors.

She said she actually took over the company from its previous owner when it went bankrupt and helped mold it into its current form.

"Ghostwalker" was supposed to be the last in the "Kingdom of Walden Series," but she's now planning a fifth and sixth book.

“I got a request from a couple of my fans and the others in the publishing house who said ' You need to write at least another one, maybe two,'” she said.

“As I was planning the fifth, I realized it was actually six. So there's going to be a book five and six after this.”

Cannon is holding a book signing for “Ghostwalker” at Sudbury Chapters from 12-4 p.m. May 27.

Her books are available at Sudbury Chapters, Bay Used Books, through online retailers such as Amazon or on her website.

Cinéfest Sudbury announces free Aug. 20 virtual screening of ‘The Artist’s Wife’
Jul 31, 2020 4:00 PM
Comments
We welcome your feedback and encourage you to share your thoughts. We ask that you be respectful of others and their points of view, refrain from personal attacks and stay on topic. To learn about our commenting policies and how we moderate, please read our Community Guidelines.