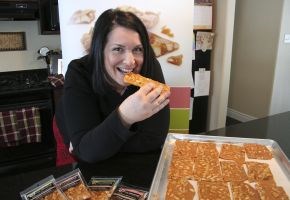 Cindy Babcock, and her Sinfully Deelicious peanut brittle, will potentially be featured on an episode of the Dragons' Den in the new year. Photo by Marg Seregelyi.

Local peanut brittle maker, Cindy Babcock, will have to wait until 2009 to appear on CBC's popular entrepreneur show Dragons' Den. Babcock started her own business called Sinfully Deelicious in 2006 out of her basement in Lively.

Babcock was featured in a Northern Life story on Tuesday, Dec. 4, where she indicated her pitch to the dragons had been taped, ready to be aired on an upcoming show.

But in a letter dated Dec. 2, Michelle MacMillan, from the CBC show, informed Babcock that her pitch segment will not be aired this 2008 season.

"Unfortunately, your pitch will not be aired this season. We know it's not easy to face the dragons and we appreciate that you braved the den! Over 2,000 people auditioned for the show this year, 200 made it to the taping in Toronto, and only half of what we taped make it to air. This year more than ever, we were overwhelmed at the quality pitches from Canadian entrepreneurs like you," stated Macmillan.

"We highly encourage you to try out again next year. Auditions for our fourth season will be announced in the spring. Thank you once again for participating in the program - the show would be nothing without our enthusiastic, motivated and inspiring pitchers!"

As a consolation, dragon Jim Treliving had e-mailed Babcock on Nov. 26, saying, "Congratulations on the best peanut brittle I have ever tasted."

Sudbury’s Nicolas Mongeon didn’t win Wall of Chefs, but loved the experience
Sep 17, 2020 5:00 PM
Comments
We welcome your feedback and encourage you to share your thoughts. We ask that you be respectful of others and their points of view, refrain from personal attacks and stay on topic. To learn about our commenting policies and how we moderate, please read our Community Guidelines.