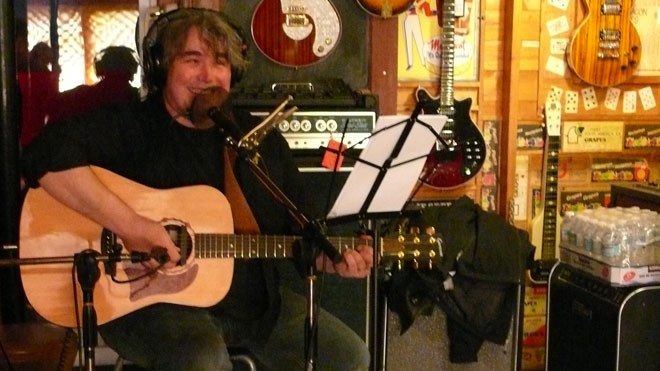 Barrette jumped at the chance, and now has two different versions of "Signs."

In January, as one-third of the local band “The Puckhogs,” Barrette came in second in the CBC's Hockey Night in Canada Song Quest contest for the group's song, "For the Love of the Game.”

After he released “Signs,” he bumped into an old friend, local music producer David Case, in the grocery store.

Case, who said Barrette has a “knack for lyrics,” offered to send the album along to an acquaintance, England-based producer Alan Glass, who has worked with such artists as Aretha Franklin and Earth, Wind and Fire.

Glass said he thought one of Barrette's songs, “Cool Side of the Pillow,” had the potential to become a hit, and asked if he could work on it with him.

Glass is now listed as a co-writer on the song, as he helped Barrette rewrite some of the lyrics.

“Really, what I remember most clearly was him saying to me 'You've got to get clear on what you're trying to say,'” Barrette said.

Glass got Barrette to lay down the vocals again, and along with Case, co-produced the revamped single.

“Cool Side of the Pillow” explores how people need to find the happy side of life, just like they turn their pillow over at night to sleep on the cool side.

"Working with Sean Barrette has been a breath of fresh air," Glass said, in an email.

"Not only is he an incredible artist, but a great song writer who is also a good guy. I enjoyed working with him and would do it any day, all day. Can't wait to do more. He definitely sleeps on the Cool Side of The Pillow."

The two versions of the song are quite different, Barrette said. The original is mellow, while the other has a bit of a spring in its step, he said.

“The first one is Sunday morning with coffee, and the second one is Saturday afternoon when you've had a really great day and you're getting ready for a really great night in the summer,” Barrette said.

“Cool Side of the Pillow” is set to be released to 125 radio stations in Canada, the United States and Europe on April 7.

While Barrette's not sure how much radio play the single will get, he said he hopes the co-writing credit with Glass will boost his songwriting reputation.

“It's pretty surreal, man,” Barrette said. “You just sort of have to go where the winds take you, sometimes.”

Case, best known as a track coach who has worked with athletes such as sprinter and Olympic gold medallist Robert Esmie, said he's happy he was able to help Barrette push his work to the next level.

“It's probably the track and field side of me,” he said. “I'm always telling my athletes to think bigger.”

For more information on the upcoming release of the “Cool Side of the Pillow” search for “seanbarrette.ca” on Facebook, and like the page.