What began about six months ago with 22 competitors ended on the weekend with one winner. Raymond Modise beat out Janique Vandal in a “tight” game on March 4, making him the chess champion at Laurentian University.
0
Mar 9, 2011 2:00 PM By: Jenny Jelen 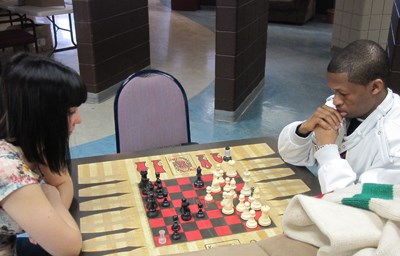 Janique Vandal (left) and Raymond Modise competed against each other in the final match of The Chess Tournament 2011 held at Laurentian University. Modise came away from the match victorious. Supplied photo.

What began about six months ago with 22 competitors ended on the weekend with one winner.

Raymond Modise beat out Janique Vandal in a “tight” game on March 4, making him the chess champion at Laurentian University. He didn't lose a single game during the tournament.

“It was really a tough competition,” he said. “I'm glad I made it through.”

Modise, a second-year international student from Botswana, said he learned a lot from the tournament.

The mining engineering student began playing chess about nine years ago and has competed in a number of tournaments since then. He said it's been a while since he's played competitively.

“I participated in a couple of tournaments when I was in high school,” he said.

In order to win at chess, Modise said it's important to think strategically.

“The aim of the game is to trap the King, so when I play white I attack straight away, moving my pieces to the side of my opponent's King,” he said. “When I play black, I play defensively until I realize that all my pieces are protected and I have (the) chance to attack.”

Modise said it's also important for players to protect their Queens.

“The queen is the most powerful piece in the game, but losing it early doesn't mean you can't win the game,” he said. “You still can win — the secret to that is to promote your pawn pieces. Once you lose your Queen, make sure that you push your pawn pieces forward.”

Sean Thomas, the student who organized the tournament, said chess is great “mental stimulation” for students.

“Chess is an awesome game once you get to know it,” he said. ”For us university-going students, it's a marvellous way to stimulate the brain.”

Thomas said he's hoping for more student participation in next year's tournament, and would even consider making a chess club at Laurentian if enough people were interested.

For more information about chess at Laurentian University, contact Thomas at sc_thomas@laurentian.ca.