Dark Night of the Soul is a six-song record drawing on themes of horror, the occult, human fear, magic & mysticism
Oct 31, 2020 7:00 PM By: Sudbury.com Staff 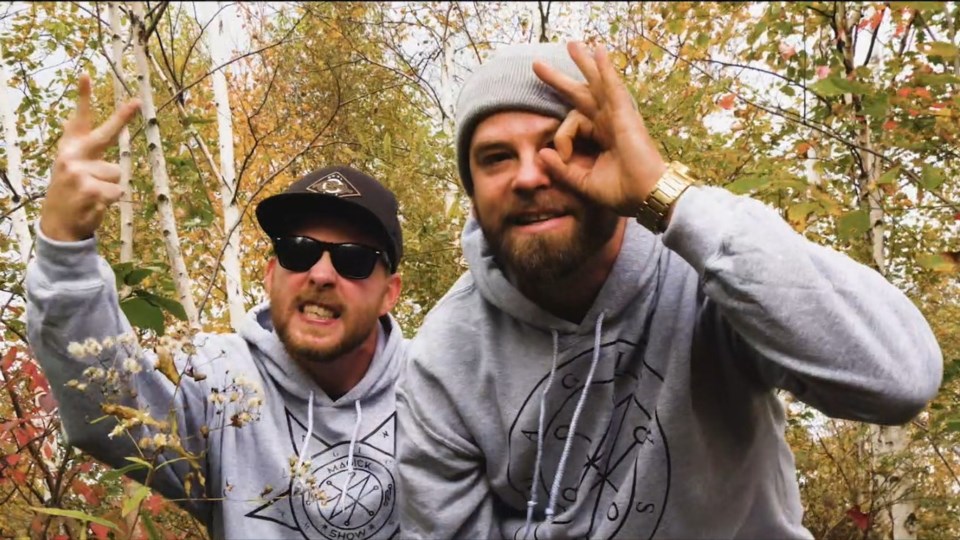 A product of rap-show afterparty discussions, the two rap artists were energized by the common goal of creating the world's rawest, most dynamic, horror-themed rap record.

Fans of rap music in the vein of Gravediggaz, Run The Jewels, Backxwash and Odd Future will instantly be drawn to this record - while anyone interested by hardcore rap, horror themes and dark mysticism will be greatly intrigued, said a press release.

Somewhat of a chilling departure from two rappers’ solo work, Dark Night of the Soul is a six-song record drawing on themes of horror, the occult, human fear, magic & mysticism.

The album’s production is credited mainly to Juno nominated artist/producer Fresh Kils, with key contributions from DJ Matto and Max Moon himself. The group has also started taking orders for special edition 7” vinyl, cassette, and digital.

“On one level, this is our pinnacle of horror-rap entertainment, timed with Halloween - just two guys creating the type of gritty, abrasive rap record they’ve loved since adolescence,” said Max Moon. “But it also gets deeper than that. Mickey has a true fascination with mysticism & spirituality that underlies alot of his contributions to the record. Also, we really wanted to transcend the horrorcore genre - addressing the state of the world through a darkened lens.”

The first track is the album’s namesake and features singer Will Himsl on the hook - akin to a combination of horror-punk greats The Misfits, Frank Sinatra, and the sonic canvas of the Wu-Tang Clan. This track is the crew’s ‘diary of a madman’ exploring the inner workings of a twisted mind.

Next on the record is Anubis, a blazing ‘rap gone heavy metal’ beat from Max Moon underlies vitriolic lyrical delivery from both rappers. The song  ranges from battling rappers to battling a society that exploits human emotion, and perpetuates inequality and exploitation.

The fourth track is the lead single from the record titled Black Mass, produced by Canadian artist DJ Matto, based out of Japan. The video, created by Here Kitty Kitty Productions, is a psychedelic danse-macabre, filmed in the isolated wilderness of Northern Ontario. The track itself is a super-hyped barrage of rapper sacrifice, occultist reference and dark ritualistic imagery, backed by haunting symphonic strings and pulsating tribal/rap drums. The chilling music video was released Oct. 27 on YouTube and Facebook.

No. 5 is Nightmare - a story rap-noir, where the two rappers sell their souls to devilish beings, in exchange for supreme lyrical skills, wealth and fame. The track also explores our deepest existential fears and nightmares, all the while being explosively energetic.  The production is a ground-shaking, dark ‘trap’ style beat, co-produced by Fresh Kils & Max Moon.

The album concludes with Oz, which takes a step outside of the fantasy-horror aesthetic to focus more on the true horrors in the world - disinformation and a lack of concern for truth perpetrated by the greed of the political/financial elite, and very often the alt-right. Canadian hip-hop innovator Moka Only lends his smooth, iconic voice and lyrics to the hook, tying together this more grounded piece.

The rappers fast-forward through the decades to imagine a post-apocalyptic looking world where might is right, scarcity is common, and the marginalized are constantly on the brink of survival. They take a moment to take specific aim at QAnon conspiracy theorists, devoted Trump supporters, and systemic racism - but it doesn’t stop there, no exploiter is safe! Release plans are in place for a cartoon-style music video, created by Red Dented Can Productions.

Dark Night of the Soul will be 100 per cent available for Halloween listening - the perfect soundtrack to light up gatherings and celebrations like a jack-o-lantern!

The duo is pressing a limited of special 7” records featuring alternate versions of Black Mass and Oz. A limited run of cassettes, as well as digital albums and DJ packs are all available for order at handsolorecords.bandcamp.com.

Mickey O’Brien and Max Moon are already heavily into work on their respective (and markedly different) new solo records, with planned releases some time in the new year. But for Halloween, Magick Show is here to challenge the gods & masters, reanimate the masses, and inject the rap scene with some musical black magic.

This album is intended for mature audiences.