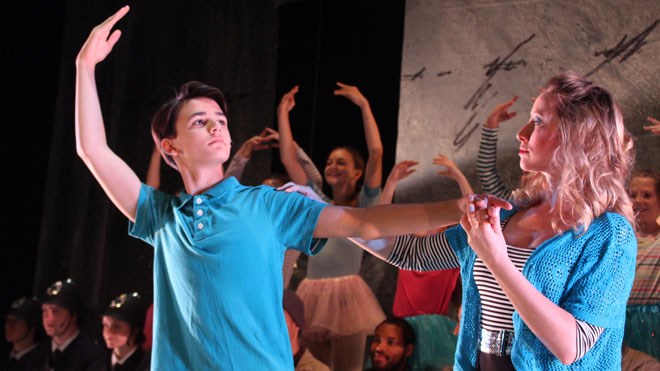 When he was six years old, Darshan Geer sat in on his older brother Satya's dance class. It turned out to be a pivotal moment in his young life.

This summer, he's also starring in the title role in YES Theatre's production of Billy Elliot the Musical, which runs Aug. 4-20.

That's something new for Geer, who has never appeared in a theatre production. Although Geer has a strong dance background, he's had to work hard on his singing skills.

“He's a wonderful, wonderful performer,” said director Alessandro Costantini. “We had a lot of really great kids come and audition. Darshan just has a really beautiful sensitivity as a human. He kind of is Billy.”

The Tony Award-winning Billy Elliot the Musical, which premiered in London's West End in 2005, is based on the 2000 film Billy Elliot. The plot revolves around motherless Billy, who trades boxing gloves for ballet shoes.

The story of his personal struggle and fulfillment are balanced against a counter-story of family and community strife caused by the UK miners' strike (1984–1985) in County Durham, in North Eastern England.

Geer said he identifies with Billy's love of dance.

“But I get a lot more support from my family than Billy does,” he said, referencing his character's father and brother, striking miners who are mystified and somewhat horrified by Billy's attraction to ballet.

Costantini, who founded the theatre company as a teen in 2008, said he auditioned for the role of Billy Elliot — unsuccessfully, it turned out — as a 12-year-old back in 2004.

He said he fell in love with Billy's story, and is glad to be able to bring the musical to Sudbury.

Given Sudbury is no stranger to protracted mining strikes — as evidenced by the 1978-78 Inco strike and the 2009-10 Vale strike — Billy Elliot is really our community's story, Costantini said.

“At its core, Sudburians understand this story,” he said.

“I just think with Billy Elliot, what's beautiful about it is his love of this art form cuts through all these massive issues. He's just sitting there at the centre of it and saying 'I have to dance, because otherwise I won't be able to breathe.'”

With a cast of 33 — including two Stratford alumni and many very young actors — as well as a live band playing the score penned by Elton John, staging the musical has been a massive undertaking, Costantini said.

“I feel like our whole team is pouring heart and love and furious passion into this,” he said.

The play runs at Sudbury Theatre Centre Aug. 4-20, Tuesday to Saturday at 8 p.m. and Sunday at 2 p.m. Tickets are available through YES Theatre's website, in person at One Sky Local Fine Goods on Durham Street or by phone at 1-800-838-3006.

Also check out Sudbury.com's extended interview with Costantini as part of our Person of Interest video series here:

Sudbury woman raised more than 190 Monarch butterflies in her backyard
Aug 7, 2020 1:00 PM
Comments
We welcome your feedback and encourage you to share your thoughts. We ask that you be respectful of others and their points of view, refrain from personal attacks and stay on topic. To learn about our commenting policies and how we moderate, please read our Community Guidelines.