Meet the man who can’t retire

When Charlie Rapsky moved from Sudbury to Elliot Lake six years ago, he had plans of retiring. His plan didn’t work, however. Without a paint brush in hand, “life seemed very vacant,” he said.
Sep 12, 2011 9:11 PM By: Jenny Jelen 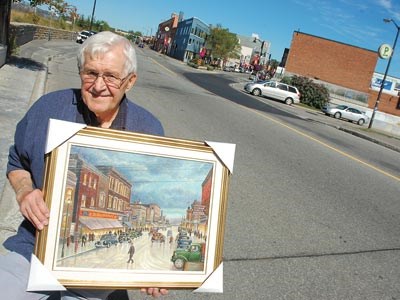 Charlie Rapsky shows off a painting of Elgin Street, circa 1940, with modern-day Elgin behind him. Photo by Jenny Jelen

When Charlie Rapsky moved from Sudbury to Elliot Lake six years ago, he had plans of retiring.

His plan didn’t work, however. Without a paint brush in hand, “life seemed very vacant,” he said.

So he did what he thought was the only sensible thing — he picked up a brush again.

“Life turned rosy from that moment on,” the 82-year-old said.

Since getting back into the craft after an eight-month hiatus, Rapsky has taken to painting in full force.

After a three-year break from exhibiting work, he’s planning to host a solo show on Oct. 15 and 16 in Lively’s Fielding Park.

Rapsky and his wife, Shirley, also have plans to move back to Sudbury in the near future. The artist, who has heart disease, said he wanted to be closer to a large city for improved access to health care services.

Once he returns to the Nickel City, it’s unlikely he’ll give up his passion.

“I will paint until they fold my arms on my chest,” he said.

Art has been something the long-time Sudburian has always been involved in. As a child, Rapsky remembered his mom having to hide crayons to prevent him from drawing murals on the wall.

At age 22, he made the trip west to study at the Vancouver School of Art. For three years, he learned from some of the country’s best artists.

Upon graduation, Rapsky returned to Sudbury. He opened a sign shop, which he successfully retired from in 1980. That’s when creating and selling art became his profession.

The first weekend he had work displayed in a local gallery, he sold four out of eight pieces. That weekend confirmed his life’s new direction.

“I never looked back,” he said.

His paintings cover a wide array of subject matter, from landscapes and city-scapes, to portraits and wildlife.

One of his favourite creations is a polar bear resting on a sheet of ice. The painting was inspired by one of Rapsky’s many trips to the Arctic.

For more information about his work, phone Rapsky at 705-461-9392 or email rapsky@personinternet.com.