Paul Ross is leading a crew of miners in “digging up support” for Sick Kids Hospital.
Apr 7, 2013 3:49 PM By: Sudbury.com Staff 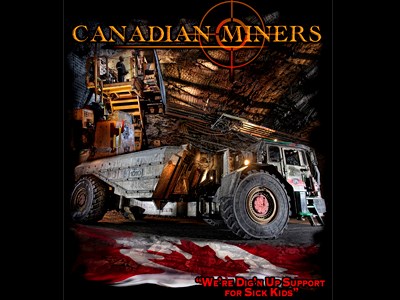 Paul Ross designed images like this one in support of Sick Kids Hospital. The graphics, which depict what mines really look like, have been hot commodities among miners. Supplied graphic.

Paul Ross is leading a crew of miners in “digging up support” for Sick Kids Hospital.

The Timmins man began Zee Best T-Shirts when he noticed all his co-workers in the mine wore shirts proudly displaying their union name or the name of the company they work for, but never what they actually do.

“There wasn't a shirt I saw that showed exactly what we the mine did,” he said.

That's when he let his artistic nature get the best of him. Soon after Ross began designing images of miners working — in the dirt, on mining equipment, with hard hats on — miners began asking where they could get theirs. In two days, he had orders in for 200 shirts.

When he's not at his “day job” as a miner, Ross is busily making and marketing shirts for everyone working underground, whatever their job may be. He doesn't mind dedicating time to the project, because it's all for a good cause.

Part of the proceeds from shirt sales are being donated to the Sick Kids Hospital. Ross said when his now-adult daughter was just a baby, she contracted a “very rare virus.”

Had the Toronto-based hospital not been so efficient and effective in treating her, Ross may not have been able to watch Amanda grow into a successful young adult.

“If we hadn't got her there in time, she would have died,” he said.

Since response and outcome has been so positive, Ross has been creating shirts for other professionals. Truck drivers, police officers, firemen and recreational bikers are excited about them.

To find out more about his designs and shirts, email zbesttshirts@hotmail.com or phone 705-951-2818.

Ross will be at the Canadian Mining and Industrial Expo in Sudbury April 24 to 25 for those who want to see his work in person.