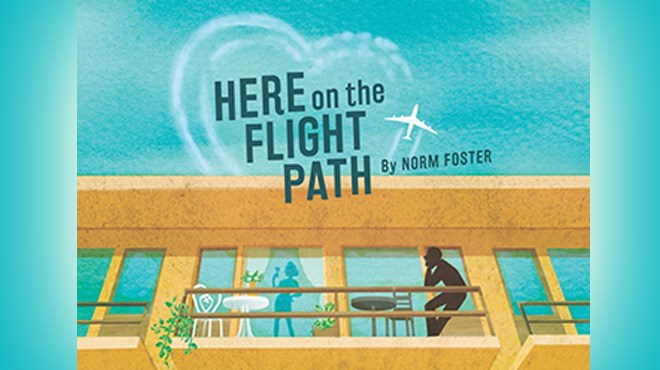 Here on the Flight Path, Norm Foster at his comic best, plays from Feb. 7 – 23 at the Sudbury Theatre Centre. (Supplied)

When Artistic Director John McHenry chose a husband and wife team to perform in playwright Norm Forster's favourite show, he was spot on.

Norm Foster wrote Here on the Flight Path for himself and his wife, performing it time and time again together. Was it unconsciously meant to be done by a married couple with undeniable chemistry?

McHenry chose accomplished Stratford actors, the  husband/wife Jamie Williams and Melanie Janzen, who, by the way, were cast in the play together in 2010 and 2016. They must be good!

“I love being able to revisit Flight Path”, says Janzen. “Both Jamie and I have worked out all the show's kinks years ago and now we're free to make even better choices than eight years ago.”

“Now we can dig deeper with the characters and situations”, agrees Williams.

In Norm Foster's hilarious Here on the Flight Path, John Cummings meets three different women over a handful of years as they move in and out of the apartment next door, sharing a balcony with him.

The scenes on the balconies with spitfire Faye, the lady of the evening; Angel, the wanna-be singer/actor (whose name Angel is an aviation term referring to altitude) and finally,with the newly-divorced Gwen are intimately revealing and comic.

It's a play about relationships and change. John and all three women are on a flight path jetting them away from old lives towards dreams and promise. The plot is brim full of comic turbulence as middle-aged John, newly divorced, navigates women and life.

Melanie Janzen — who plays all three female characters — salutes Norm Foster for his ability to give us more than just laughs.

“He has this ability to use highly relatable characters who shed light on us.”

She's convinced we'll see part of ourselves in each of these characters. When if comes to laughs, both actors know the audience will have plenty of them, but they don't want to guess where.

“We don't want to think about what Sudbury audiences will find funny even though we know there'll be plenty of belly laughs.” Both nod in agreement, finishing each other's thoughts and sentences. After all, that's what chemistry does.

The rehearsal hall is abuzz as the actors work bits and nuances with director John McHenry.

“Laughter is the best medicine,” quips Janzen, “especially in February. We need it. And the other thing we need is the connection with one another without technology. Live theatre does that perfectly as we all share the experience together. This person-to-person connection in the theatre and on stage is more important than ever now.”

“And don't forget to tell the men they'll love the show,” pipes in Jamie Williams. “The character I play, John Cummings, is newly divorced and knows pathetically little about women and relationships.  He's a real guy who can't deal with his inner life... a bit of a goof, for sure, and men will relate to that. Just ask me!”

Here on the Flight Path, Norm Foster at his comic best, plays from Feb. 7 – 23 at the Sudbury Theatre Centre.