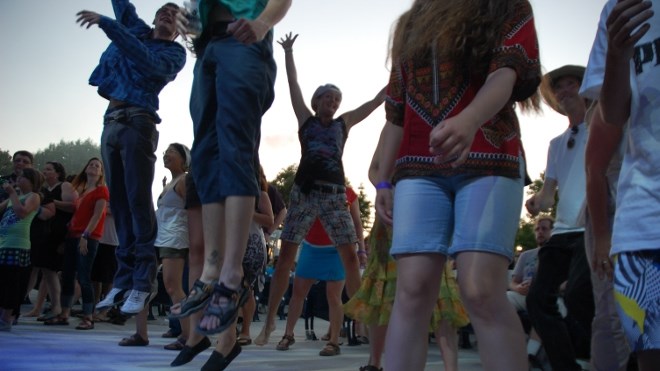 Since 1972, Northern Lights Festival Boreal has celebrated the best in roots music, and the 45th iteration promises to be no different. File photo

Northern Lights Festival Boréal (NLFB) is well into the planning of a blowout 45th edition, to take place July 8-10 in Bell Park.

In a press release, the minds behind NLFB said the 44th iteration in 2015 was in many ways the best in years, with near-record attendance of more than 10,200, a record number of vendors, and unforgettable performances by more than 50 acts, including the Melbourne Ska Orchestra, Sarah Harmer, and many more.

As always, this year’s festival will feature a diverse lineup of performers ranging from Canadian legends to undiscovered masters, from roots to experimental, from traditional to innovative.

Organizers said they're ecstatic to be able to announce a few acts that have been confirmed for July. Of course, many more are to come. The full lineup won't be announced until spring.

Having both played the festival and headlined on their own, Natalie MacMaster and Donnell Leahy will headline together July 9. MacMaster is a globally acclaimed fiddler, while Leahy is the musical leader of the double-platinum selling family band, Leahy.

Calling them the "first couple of contemporary Celtic music," NLFB said McMaster and Leahy will be performing songs from “One,” (produced by Bob Ezrin, famous for his work with Pink Floyd and others) their recording debut as a duo, as well as a selection of re-interpretations from their expansive catalogue of Celtic music.

MacMaster also visits Sudbury on March 10 as part of a soul singer Johnny Reid's latest tour. Check out our interview with her here.

On the theme of couples making music together, NLFB welcomes back the duo of Kate Maki and Fred Squire to the festival. Squire has been making an impact on Canadian music since the early 1990s, with collaborators including Shotgun Jimmie, Julie Doiron and Daniel Romano.

Maki is from Sudbury and has released five albums since 2003, receiving much critical praise for her alt-country stylings. After getting married following a tour, they’ve settled in Copper Cliff to raise a family.

Lucky for us, they never stopped writing music. Maki’s upcoming sixth album, "Head In The Sand," is to be released in May 2016, with Squire’s new record following shortly after.

After a brief hiatus from NLFB, Sheesham and Lotus are back. The “new kings of old time” have been a staple at the festival over the years, with their energetic performances and fascinating workshops.

They walk, talk, dress, play and sing like they stepped out of the 1920s, and onto a festival stage. On top of their scheduled performances and workshops, look for them throughout the festival site and at the General Store open stage as they serve as the unofficial mascots of the weekend.

Francophone songwriters Melanie Brulée of Cornwall, Ont., and Anique Granger of Saskatoon, Sask., have both released albums in the past year ("Débridée" and "Comme une émeute" respectively) and have toured together across Canada.

Neither are strangers to Sudbury, but they will be hitting the NLFB stages for the first time.

Also familiar with Sudbury (but new to the festival) is Toronto bluegrass combo Union Duke. A few house concerts, and a well received slot at Vale’s summer concert series last summer have given them a taste for Sudbury. This summer they will touring their upcoming record, "Golden Days."

Of course, NLFB has always been a family friendly event, so there's entertainment for the little ones as well. Returning is children’s entertainer Cindy Cook (http://www.cindy-cook.com/) of the Polka Dot Door and countless other children’s shows. Born in Sudbury, Cook has performed for children the world over, and is no stranger to the festival.

Since 1972, NLFB has presented the best in Canadian roots and modern music, and been a lightning rod for the energy of Northern Ontario’s artistic community.