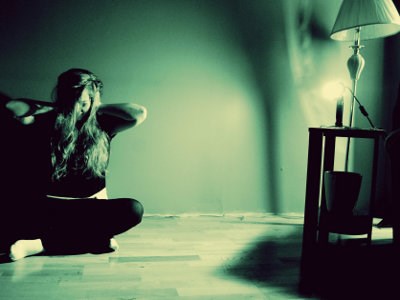 “The photo represents how the youth of today struggle to balance everything that goes on in their lives, such as school, extracurricular activities, work and even life at home,” Ribout said in the description of her photo. “The results can be catastrophic if not fixed in time.”

Ribout's photo was chosen as the winner of the Sudbury and District Health Unit's PhotoVoice Contest, which ran from May 5 to June 8. She will be presented with a Canon Rebel camera for her effort.

Youth between the ages of 10 and 24 were encouraged to submit photographs showing their community's strengths and problems related to healthy living issues, such as healthy eating, physical activity, drug and alcohol abuse, tobacco, mental health and injury prevention.

An exhibition of the photos was set up in the William Bell Gazebo in Bell Park June 11, receiving a steady stream of visitors at the beach during a school professional development day.

“The photos we received are amazing,” Ryan Hachey, a health promotion worker with the health unit, said, in between handing out freezies and frisbees to those visiting the exhibition.

“The photos were evaluated not only on what they looked like, but the message that came with them. We were pleased to see what was submitted.”

Through the photo contest, the health unit hoped to raise awareness among youth of healthy living, he said.

The photo contest was organized by members of the health unit's youth group, many of whom entered the contest themselves.

Miguel Oliveira, one of the youth group members, said he had a lot of fun working on the project.

He entered a photo he took of a cigarette butt on the paving stones in front of the hospital in the contest.

#COVIDKindness: Sudburians are sharing kindness during the pandemic and it's catching on
Mar 26, 2020 2:45 PM
Comments
We welcome your feedback and encourage you to share your thoughts on this story. We ask that you be respectful of others and their points of view, refrain from personal attacks and stay on topic. To learn about our commenting policies and how we moderate, please read our Community Guidelines.

Domestic air, train travel denied to anyone with COVID-19 symptoms
0