Producer Brandon Nutt, formerly of Sudbury and now working in Hollywood, has returned home to shoot his latest film, in which Sudbury will double as a Colorado town. His company, Nutthouse Moving Pictures, began shooting Phase One Monday, Nov. 9.
Nov 10, 2009 2:11 PM By: Bill Bradley 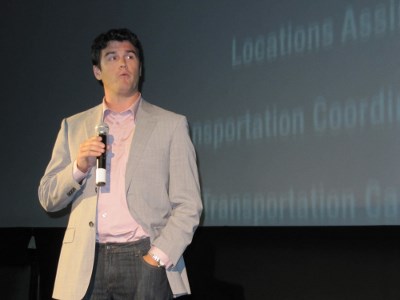 Brandon Nutt is shooting his latest film, Phase One, in his home town of Sudbury. The $3 million dollar budget for the film may be low end for Hollywood but it is big for Sudbury since most of the money will stay here, said city officials. Photo by Bill Bradley.

Producer Brandon Nutt, formerly of Sudbury and now working in Hollywood, has returned home to shoot his latest film, in which Sudbury will double as a Colorado town.

His company, Nutthouse Moving Pictures, began shooting Phase One Monday, Nov. 9. The story revolves around two friends who enlist in what they think is a way to make easy money - allergy drug testing.

What they thought was a test for allergy medicine is actually a government sponsored program seeking the results in the realm of human regeneration. The two friends were just seeking to make some quick cash so they could travel to Europe, and instead find they are way over their head, explained the release.

Nutt's last film, Finding Bliss, about a female screenwriter from New York trying to break into the Hollywood film business, played at Cinéfest this fall. Nutt said at that time he would also be doing filming in New Orléans for another film.

Stepanie Harris, Greater Sudbury business development officer, said the Phase One production is important to the city because in the past only parts of movie filming was done here. Production of Phase One is being shot entirely in Sudbury, said the company.

“The film's budget is about $3 million. That means that a lot of the money will be spent here,” said Harris.

“Though their budget is on the low side for Hollywood, it is big for us. He is bringing in 26 actors and hiring some locally. He is also building a set in the Cambrian Arena. It is not being used at the present time,” she said.

Nutthouse is paying the city for the use of the arena, noted Harris.

“They are paying for heating the building (for example). But that is a lot cheaper than what they would pay (for space) in Hollywood,” she said.

Harris said the economic spin offs from the filming  for local businesses include renting furniture and purchasing materials to build sets. Local actors, including 50 males and females, aged 18 to 28, have been hired to be student extras.  Some local production crew members were needed, according to Harris.

Harris said shooting will take place at Laurentian University, Willet Green Miller Centre and the Ministry of Northern Development and Mines as well as in the set being constructed.

“The crew is happy to be in Sudbury and eager to explore the community both on set and off,” said the company.

Dennis Landry, executive director of Music and Film in Motion, said his non-profit organization had been in discussions with Nutt for a year.

“We discussed with him locations and our data base of technical support people,” said Landry.

He said Phase One's genre, bordering on horror, tends to do well at the box office.