There is no way to tell what kind of fur is on clothing imported from China, Louise Antonioni said. The local Fur-Bearer Defenders activist said labels will often say “fur from China,” which could easily mean that it is dog or cat fur.
Jul 18, 2011 6:07 PM By: Jenny Jelen 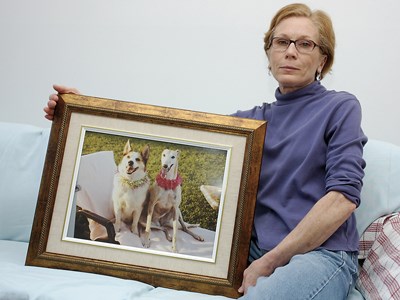 Louise Antonioni, a local Fur-Bearer Defenders activist, said her former pets, Kash and Emma, were her inspiration for becoming involved in the group that speaks out on behalf of domestic pets slaughtered for fur in China. Photo by Jenn Jelen.
There is no way to tell what kind of fur is on clothing imported from China, Louise Antonioni said.

The local Fur-Bearer Defenders activist said labels will often say “fur from China,” which could easily mean that it is dog or cat fur.

Antonioni said more than two million animals, that would be considered pets by Canadian standards, are slaughtered each year for their coats. “Most people have never heard of this atrocity,” the Sudbury area resident said. Antonioni first learned about the issue while watching a show about the Fur-Bearer Defenders last summer. Since then, she has been helping raise awareness in the north.

The organization is hoping that enough citizen support will eventually make it illegal to have unlabelled fur products coming to Canada, or for any fur products to come to Canada from China. Other countries, like the USA,

Australia and European Union, have already banned the import of Chinese furs. According to information published by Fur-Bearer Defenders, cat and dog fur is often used because it is cheaper than other furs. It is usually processed to the point where its no longer recognizable. Antonioni said animals are often kept in cold, wet conditions too, to encourage them to grow thicker coats.

She said the facts may be disturbing, but that’s what is driving her to spread the word. “It hurts, but then it gives you the gumption to do something. We have to let people know this is going on.”

The animal-lover said she was inspired to act as a voice for the animals because she has owned a number of dogs in her life. She said it’s an issue that hits close to home for her.

When she first went to dogcatfur.com, Antonioni said she “bawled her eyes out.” “It made me mad,” she said.

Other animal lovers agree that it is a “disgusting” practise. Nicole Chauhan, owner of Town and Country Clips in Hanmer, keeps postcards promoting the cause at her shop.

She said most customers are not aware that dogs and cats are slaughtered for their fur. “They couldn’t believe it’s actually happening,” she said. She said she keeps the cards out to help spread the word and help Antonioni in her quest to make more people aware of the “cruelty to animals.”

Antonioni plans to attend some events in the animal community this summer to spread the word about Fur-Bearer Defenders, and she has already handed out postcards at a number of area businesses. Anyone interested in finding out more about the cause, or supporting her in her efforts to inform others of the industry, are welcome to visit the organization’s website or chat with her at events this summer.