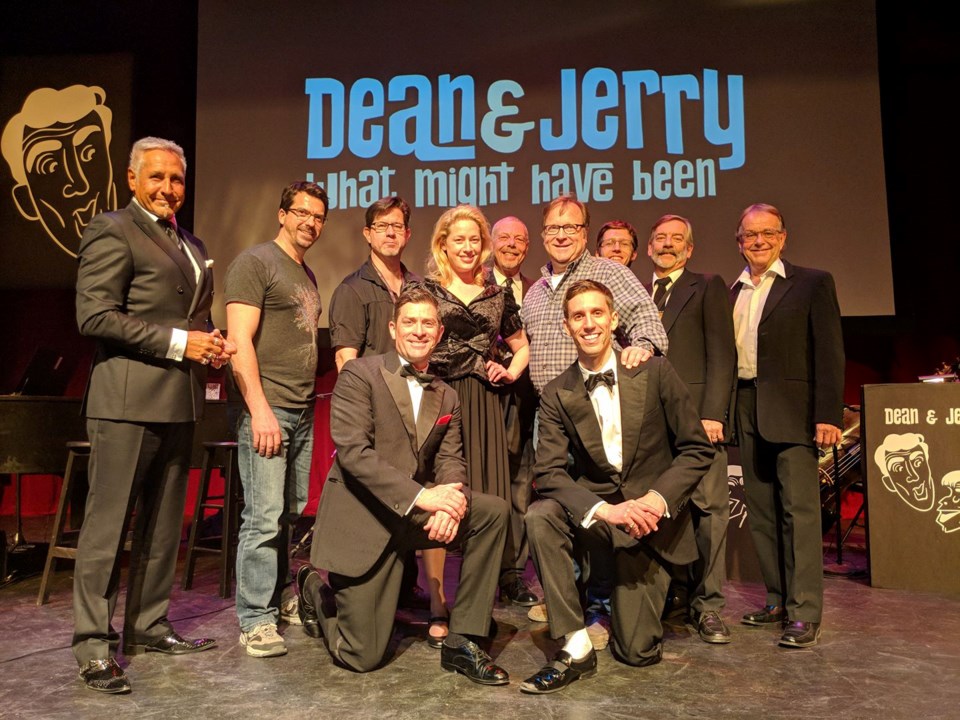 The cast and crew of Dean & Jerry. (Supplied)

Pop culture observers have suggested the popularity of Dean Martin and Jerry Lewis in the 1950s was in part because they provided an escape from Cold War politics.

“Dean & Jerry, What Might Have Been” at the Sudbury Theatre Centre provides a late winter escape from our own bad news, fake and otherwise.

“Dean & Jerry,” which runs until March 25, is a co-operation with the Orillia Opera House. It is written and directed by Jesse Collins, a Canadian actor and director, best known for his work on the television show “Doggs & Katts.”

Who could not like a theatrical production with lots of slapstick comedy and some great swing standards?

This show is a tribute to the king of crooners and king of comedy. Martin died in 1995 and Lewis died in 2017. They played their last gig together 60 years ago, but it seems like only yesterday because they were so celebrated — they made16 movies together — long before everyone was famous for five minutes.

Their antics are backed up by a live band with Sudbury musicians Tony Jurgilas on drums, Brian Quebec on bass, Allan Walsh on saxophone and flute, and musical director Meredith Zwicker on piano. They are joined by Huntsville’s John Minnis on trumpet, guitar, keyboard and vocals.

“Dean & Jerry” relates how Lewis started out lip-syncing to records. Martin was a boxer turned nightclub act from Ohio. After teaming up in Atlantic City in 1946, they worked together for 10 years.

Lewis would later describe their act as “sexy and slaptick.”

I remember being surprised to learn that Lewis was the smart one, often described as a “control freak” who did all the heavy lifting for the duo, and this caused the split of an act described by critics “as big as Beatlemania” at the time.

After their breakup, they both had successful solo careers, but famously did not speak to each other until 1976 when Martin made a surprise appearance on Lewis' annual Labour Day telethon for Muscular Dystrophy.

This is the final production of the STC’s troubled 2017/18 season where all the drama was off stage. New artistic director John Henry promises more music and laughter for the next season.

Vicki Gilhula is the editor of Sudbury Living magazine.

'Touched the lives of many': Former Cambrian music prof John Hannah has passed away
Jan 8, 2021 10:00 AM
Comments