Rosie & the Riveters are described as four sassy dames from Saskatoon, Saskatchewan, who perform uplifting music with a 1940’s flare. The quartet will be performing in Sudbury at the Towne House on Oct. 22.
0
Sep 23, 2015 12:04 AM By: Sudbury.com Staff 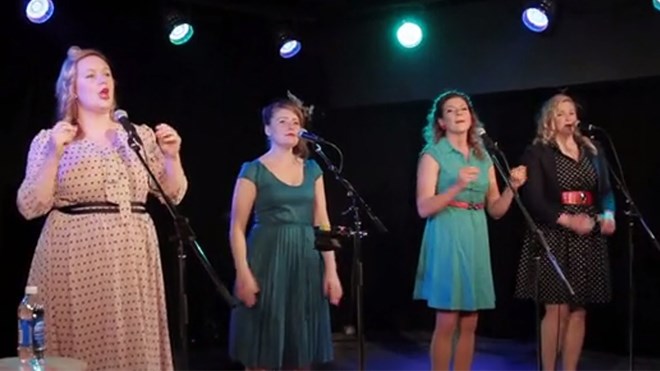 The quartet consists of Farideh Ceaser, Melissa Nygren, Allyson Reigh and Alexis Normand. They are delighted to announce the release of their debut studio album, Good Clean Fun! which will be available via CD, iTunes and Bandcamp on Oct. 8 2015 followed by a tour of nearly 30 live shows across Canada.

The record features 12 original songs that explore everything from the Riveters’ deep love of thrift store shopping (Red Dress) to post-apocalyptic visions of the melting of the ice caps (Watching the Water Rise) to dancing angels (Dancing  ‘cause of my Joy).

Good Clean Fun! is a high-energy and versatile album that combines The Andrews Sisters’ vintage vocal treatment with Mahalia Jackson’s soul and the sweetness of The Good Lovelies. The tunes explore overarching values like love, harmony and gratitude with charm and sass.

“We wanted this record to show that female songwriters can write lyrics that don’t just talk about broken hearts. When we first started performing together, we sang a mix of deep-south gospel tunes and war-time numbers and have used those as jumping-off points to write original material,” said Ceaser

The Riveters were mentored by Canadian roots/gospel music legend, Ken Whiteley and spent a few intensive days with him at Alexis’ lakefront family cabin on Wakaw Lake, SK where together they refined the songs and vocal arrangements.

Having hosted workshops at over 120 folk festivals, Ken has expertise in the gospel genre and has performed with luminaries such as The Blind Boys of Alabama.

Listen to a private preview of the album here.

Donate your old formal wear and help make someone's prom great
Jan 14, 2020 4:00 PM
Comments
We welcome your feedback and encourage you to share your thoughts on this story. We ask that you be respectful of others and their points of view, refrain from personal attacks and stay on topic. To learn about our commenting policies and how we moderate, please read our Community Guidelines.

Vagnini to serve another term as police board chair
0

Ford criticizes teachers' union leaders, says he won't give in to salary demands
0