Santa Claus and Mrs. Claus will of course be at the Greater Sudbury Santa Claus Parade Saturday, Nov. 16, but so will Superman, Batman and Wonder Woman.

That's because the theme of Sudbury's 61st annual Santa parade is Superhero Christmas.

“Superheroes right now are so big between all of the movies that are out, not just with little people, but people of all ages,” said Maureen Luoma, executive director of Downtown Sudbury, who sits on the parade organizing committee.

With Halloween just around the corner, many kids will likely go trick-or-treating in superhero costumes, so Luoma said they could possibly wear them to the parade (maybe accompanied by a Santa hat) a few weeks later.

The event starts this year at 2 p.m. in the TD Canada Trust Parking Lot at the corner of Durham and Cedar streets with the Santa Watch Party.

Then at 5:15 p.m., there will be a fireworks display launched from All Nations Church, followed by the parade itself at 5:30 p.m.

Last year, a number of changes were made to the parade to increase safety, including drastically reducing the length of the parade route to ensure there's enough volunteers to keep crowds back.

This year the parade follows almost the same route (it runs along Ste. Anne Road, Elgin Street, Larch Street, Durham Street and Elm Street), but will be about one block longer.

See the parade route below: 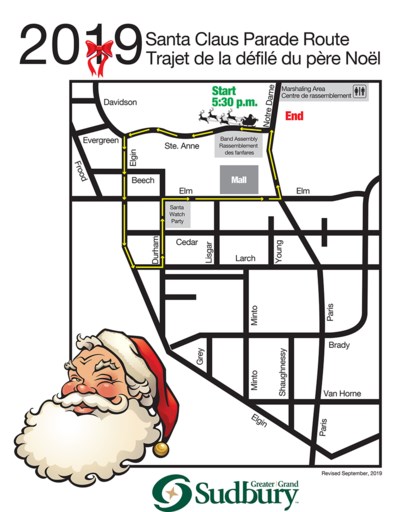 “The only lengthening is really one block,” Luoma said. “Last year it turned off Elgin onto Cedar. This year it will turn off Elgin onto Larch. It's just enough to
hopefully thin those congested areas out a little bit.”

As has been the case for the last couple of years, candy will be distributed by volunteers along the parade route just prior to the start of the event.

Candy used to be handed out during the parade itself, raising safety concerns for spectators, especially eager children who might dart out into the road.

In 2018, a four-year-old girl was killed by a float in the Santa Claus Parade in Yarmouth, Nova Scotia.

Const. Rick Carr of the Greater Sudbury Police Service, who's the co-chair of the Santa parade organizing committee, urges parents to make sure their kids don't leave the side of the road.

“You've got 20,000 or 25,000 people in the downtown core,” he said. “The children are excited to not only see Santa, but by the allure of all the lights and the floats and the giveaways for the candy.

“Children sometimes get distracted and they may not be aware of the concern of the next transport coming down there. They're more focused on something else.

“We've altered the route slightly. We've made it so it will be a safer parade by distributing the handouts and candies prior to the start of the parade so the children aren't entering the roadway when the transports or floats are coming around.

The parade's organizers note that the deadline for entries into the Santa parade is Friday, Nov. 1.

For more information about entering a group into the parade or volunteering, visit the parade's website, www.sudburysantaclausparade.com, or phone leisure services at the City of Greater Sudbury at 705-674-4455, ext. 2446.