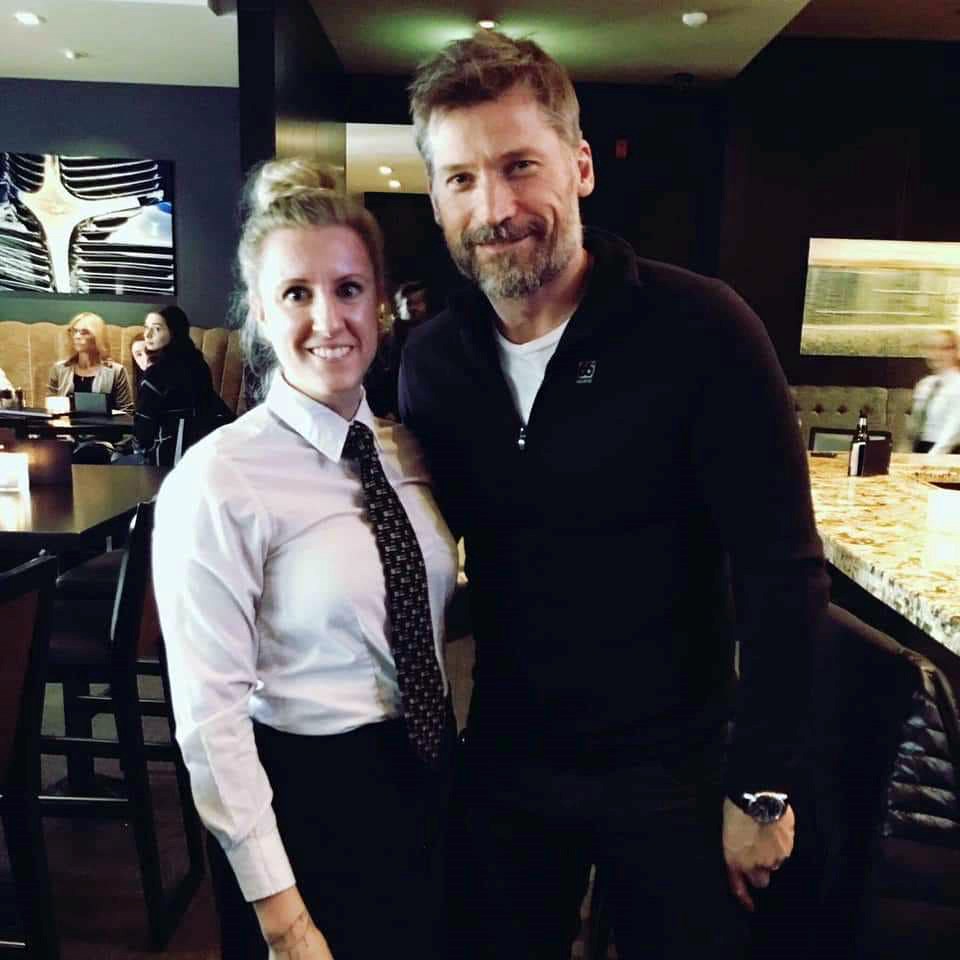 A listener provided KiSS 105.3 host Shannon King with a photo of Game of Thrones actor Nikolaj Coster-Waldau taken at The Keg Steak House on The Kingsway. A reader informed us the woman in the photo is Meghan Mainville. (Facebook.com/KiSSSudbury)

Danish actor Nikolaj Coster-Waldau, who plays the very complicated character Jaime Lannister on the fantasy series Game of Thrones, is in Sudbury this week to film a new movie, and now he's been spotted at a local restaurant.

Based on a screenplay by U.S. writer Micah Ranum, Coster-Waldau is starring in The Silencing, which tells the story of a reformed hunter (Coster-Waldau) who now runs a wildlife sanctuary. He's enlisted by a local sheriff to help track down a vicious killer who may have kidnapped his daughter several years ago.

The film was supposed to be shot in Europe, but a location change last month moved the production to Sudbury.

Shannon King hosts KiSS 105.3 Mornings with Shannon during the week. On April 19, a listener shared a photo with King that had been taken last week at The Keg Steak House and Bar. A reader tells Sudbury.com the woman in the photo is Meghan Mainville — thanks!

If you've had a brush with fame, Sudbury.com wants to see, too! Send photos of your encounter with a movie or TV star and tell us what that was like.

Co-starring in The Silencing is British actress Annabelle Wallis, who appeared in Tom Cruise's 2017 film The Mummy, the British TV series Peaky Blinders and, more recently, as the voice of Nora, the onboard computer in an episode of Star Trek: Short Treks, a series of short films featuring characters from Star Trek: Discovery.

Season 8 of Game of Thrones debuted April 14. Coster-Waldau's GoT character Jaime Lannister is unique considering he's become a fan favourite despite his often terrible behaviour. He's considered a good guy even though (spoiler alert for anyone who hasn't seen the show) he has sired three children with his sister (Cersei), pushed a child (Bran) out of a castle window to cover up the relationship and sided with the evil Bolton and Frey families, who go on to commit several atrocities against the show's main protagonists, the Stark family.

The final season, which includes six often movie-length episodes, is based on George R.R. Martin's A Song of Ice and Fire series of books. While Martin has yet to complete the series, GoT writers based the finale on an outline Martin provided of his vision for how the books will end.

Sudburians launch into another boating season
May 18, 2020 10:18 AM
Comments
We welcome your feedback and encourage you to share your thoughts. We ask that you be respectful of others and their points of view, refrain from personal attacks and stay on topic. To learn about our commenting policies and how we moderate, please read our Community Guidelines.